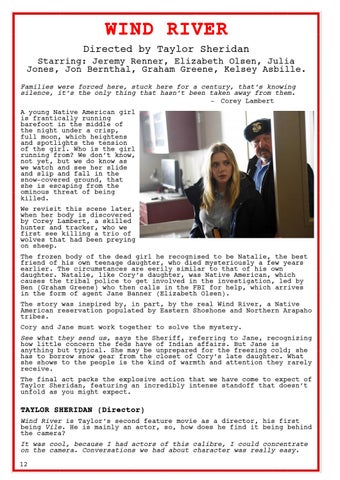 WIND RIVER Directed by Taylor Sheridan Starring: Jeremy Renner, Elizabeth Olsen, Julia Jones, Jon Bernthal, Graham Greene, Kelsey Asbille. Families were forced here, stuck here for a century, that’s knowing silence, it’s the only thing that hasn’t been taken away from them. - Corey Lambert A young Native American girl is frantically running barefoot in the middle of the night under a crisp, full moon, which heightens and spotlights the tension of the girl. Who is the girl running from? We don’t know, not yet, but we do know as we watch and see her slide and slip and fall in the snow-covered ground, that she is escaping from the ominous threat of being killed. We revisit this scene later, when her body is discovered by Corey Lambert, a skilled hunter and tracker, who we first see killing a trio of wolves that had been preying on sheep. The frozen body of the dead girl he recognised to be Natalie, the best friend of his own teenage daughter, who died mysteriously a few years earlier. The circumstances are eerily similar to that of his own daughter. Natalie, like Cory’s daughter, was Native American, which causes the tribal police to get involved in the investigation, led by Ben (Graham Greene) who then calls in the FBI for help, which arrives in the form of agent Jane Banner (Elizabeth Olsen). The story was inspired by, in part, by the real Wind River, a Native American reservation populated by Eastern Shoshone and Northern Arapaho tribes. Cory and Jane must work together to solve the mystery.

See what they send us, says the Sheriff, referring to Jane, recognizing how little concern the feds have of Indian affairs. But Jane is anything but typical. She may be unprepared for the freezing cold; she has to borrow snow gear from the closet of Cory’s late daughter. What she shows to the people is the kind of warmth and attention they rarely receive. The final act packs the explosive action that we have come to expect of Taylor Sheridan, featuring an incredibly intense standoff that doesn’t unfold as you might expect.

TAYLOR SHERIDAN (Director) Wind River is Taylor’s second feature movie as a director, his first being Vile. He is mainly an actor, so, how does he find it being behind the camera? It was cool, because I had actors of this calibre, I could concentrate on the camera. Conversations we had about character was really easy. 12