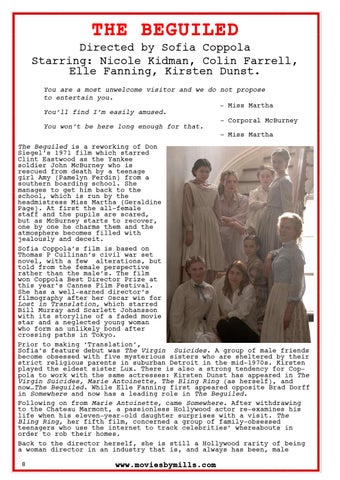 THE BEGUILED Directed by Sofia Coppola Starring: Nicole Kidman, Colin Farrell, Elle Fanning, Kirsten Dunst. You are a most unwelcome visitor and we do not propose to entertain you. - Miss Martha You’ll find I’m easily amused. - Corporal McBurney You won’t be here long enough for that. - Miss Martha The Beguiled is a reworking of Don Siegel’s 1971 film which starred Clint Eastwood as the Yankee soldier John McBurney who is rescued from death by a teenage girl Amy (Pamelyn Ferdin) from a southern boarding school. She manages to get him back to the school, which is run by the headmistress Miss Martha (Geraldine Page). At first the all-female staff and the pupils are scared, but as McBurney starts to recover, one by one he charms them and the atmosphere becomes filled with jealously and deceit. Sofia Coppola’s film is based on Thomas P Cullinan’s civil war set novel, with a few alterations, but told from the female perspective rather than the male’s. The film won Coppola Best Director Prize at this year’s Cannes Film Festival. She has a well-earned director’s filmography after her Oscar win for Lost in Translation, which starred Bill Murray and Scarlett Johansson with its storyline of a faded movie star and a neglected young woman who form an unlikely bond after crossing paths in Tokyo. Prior to making ‘Translation’, Sofia’s feature debut was The Virgin Suicides. A group of male friends become obsessed with five mysterious sisters who are sheltered by their strict religious parents in suburban Detroit in the mid-1970s. Kirsten played the eldest sister Lux. There is also a strong tendency for Coppola to work with the same actresses: Kirsten Dunst has appeared in The Virgin Suicides, Marie Antoinette, The Bling Ring (as herself), and now…The Beguiled. While Elle Fanning first appeared opposite Brad Dorff in Somewhere and now has a leading role in The Beguiled. Following on from Marie Antoinette, came Somewhere. After withdrawing to the Chateau Marmont, a passionless Hollywood actor re-examines his life when his eleven-year-old daughter surprises with a visit. The Bling Ring, her fifth film, concerned a group of family-obsessed teenagers who use the internet to track celebrities’ whereabouts in order to rob their homes. Back to the director herself, she is still a Hollywood rarity of being a woman director in an industry that is, and always has been, male 8