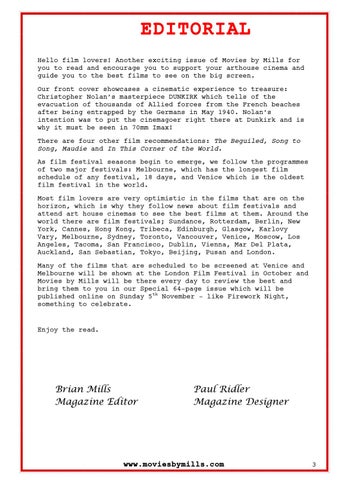 EDITORIAL Hello film lovers! Another exciting issue of Movies by Mills for you to read and encourage you to support your arthouse cinema and guide you to the best films to see on the big screen. Our front cover showcases a cinematic experience to treasure: Christopher Nolan’s masterpiece DUNKIRK which tells of the evacuation of thousands of Allied forces from the French beaches after being entrapped by the Germans in May 1940. Nolan’s intention was to put the cinemagoer right there at Dunkirk and is why it must be seen in 70mm Imax!

There are four other film recommendations: The Beguiled, Song to Song, Maudie and In This Corner of the World. As film festival seasons begin to emerge, we follow the programmes of two major festivals: Melbourne, which has the longest film schedule of any festival, 18 days, and Venice which is the oldest film festival in the world. Most film lovers are very optimistic in the films that are on the horizon, which is why they follow news about film festivals and attend art house cinemas to see the best films at them. Around the world there are film festivals; Sundance, Rotterdam, Berlin, New York, Cannes, Hong Kong, Tribeca, Edinburgh, Glasgow, Karlovy Vary, Melbourne, Sydney, Toronto, Vancouver, Venice, Moscow, Los Angeles, Tacoma, San Francisco, Dublin, Vienna, Mar Del Plata, Auckland, San Sebastian, Tokyo, Beijing, Pusan and London. Many of the films that are scheduled to be screened at Venice and Melbourne will be shown at the London Film Festival in October and Movies by Mills will be there every day to review the best and bring them to you in our Special 64-page issue which will be published online on Sunday 5th November – like Firework Night, something to celebrate.