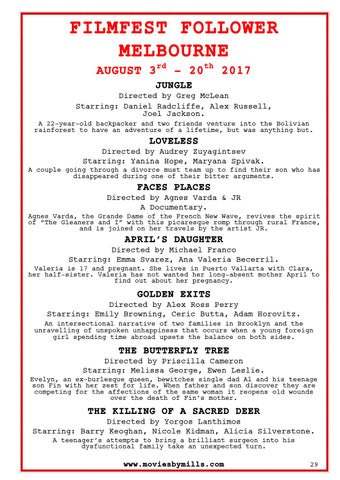 FILMFEST FOLLOWER MELBOURNE AUGUST 3rd - 20th 2017 JUNGLE Directed by Greg McLean Starring: Daniel Radcliffe, Alex Russell, Joel Jackson. A 22-year-old backpacker and two friends venture into the Bolivian rainforest to have an adventure of a lifetime, but was anything but.

LOVELESS Directed by Audrey Zuyagintsev Starring: Yanina Hope, Maryana Spivak. A couple going through a divorce must team up to find their son who has disappeared during one of their bitter arguments.

FACES PLACES Directed by Agnes Varda &amp; JR A Documentary. Agnes Varda, the Grande Dame of the French New Wave, revives the spirit of “The Gleaners and I” with this picaresque romp through rural France, and is joined on her travels by the artist JR.

APRIL’S DAUGHTER Directed by Michael Franco Starring: Emma Svarez, Ana Valeria Becerril. Valeria is 17 and pregnant. She lives in Puerto Vallarta with Clara, her half-sister. Valeria has not wanted her long-absent mother April to find out about her pregnancy.

THE BUTTERFLY TREE Directed by Priscilla Cameron Starring: Melissa George, Ewen Leslie. Evelyn, an ex-burlesque queen, bewitches single dad Al and his teenage son Fin with her zest for life. When father and son discover they are competing for the affections of the same woman it reopens old wounds over the death of Fin’s mother.

THE KILLING OF A SACRED DEER Directed by Yorgos Lanthimos Starring: Barry Keoghan, Nicole Kidman, Alicia Silverstone. A teenager’s attempts to bring a brilliant surgeon into his dysfunctional family take an unexpected turn.