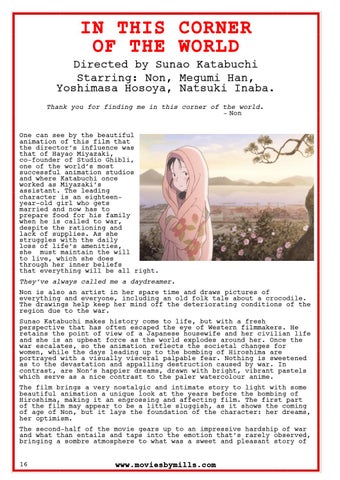 IN THIS CORNER OF THE WORLD Directed by Sunao Katabuchi Starring: Non, Megumi Han, Yoshimasa Hosoya, Natsuki Inaba. Thank you for finding me in this corner of the world. - Non One can see by the beautiful animation of this film that the director’s influence was that of Hayao Miyazaki, co-founder of Studio Ghibli, one of the world’s most successful animation studios and where Katabuchi once worked as Miyazaki’s assistant. The leading character is an eighteenyear-old girl who gets married and now has to prepare food for his family when he is called to war, despite the rationing and lack of supplies. As she struggles with the daily loss of life’s amenities, she must maintain the will to live, which she does through her inner beliefs that everything will be all right. They’ve always called me a daydreamer. Non is also an artist in her spare time and draws pictures of everything and everyone, including an old folk tale about a crocodile. The drawings help keep her mind off the deteriorating conditions of the region due to the war. Sunao Katabuchi makes history come to life, but with a fresh perspective that has often escaped the eye of Western filmmakers. He retains the point of view of a Japanese housewife and her civilian life and she is an upbeat force as the world explodes around her. Once the war escalates, so the animation reflects the societal changes for women, while the days leading up to the bombing of Hiroshima are portrayed with a visually visceral palpable fear. Nothing is sweetened as to the devastation and appalling destruction caused by war. In contrast, are Non’s happier dreams, drawn with bright, vibrant pastels which serve as a nice contrast to the paler watercolour anime. The film brings a very nostalgic and intimate story to light with some beautiful animation a unique look at the years before the bombing of Hiroshima, making it an engrossing and affecting film. The first part of the film may appear to be a little sluggish, as it shows the coming of age of Non, but it lays the foundation of the character: her dreams, her optimism. The second-half of the movie gears up to an impressive hardship of war and what than entails and taps into the emotion that’s rarely observed, bringing a sombre atmosphere to what was a sweet and pleasant story of 16