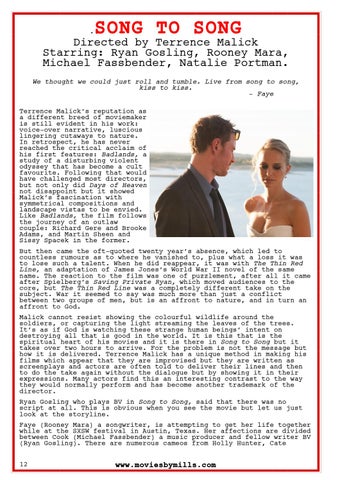 Directed by Terrence Malick Starring: Ryan Gosling, Rooney Mara, Michael Fassbender, Natalie Portman. We thought we could just roll and tumble. Live from song to song, kiss to kiss. - Faye Terrence Malick’s reputation as a different breed of moviemaker is still evident in his work: voice-over narrative, luscious lingering cutaways to nature. In retrospect, he has never reached the critical acclaim of his first features: Badlands, a study of a disturbing violent odyssey that has become a cult favourite. Following that would have challenged most directors, but not only did Days of Heaven not disappoint but it showed Malick’s fascination with symmetrical compositions and landscape vistas to be envied. Like Badlands, the film follows the journey of an outlaw couple: Richard Gere and Brooke Adams, and Martin Sheen and Sissy Spacek in the former. But then came the oft-quoted twenty year’s absence, which led to countless rumours as to where he vanished to, plus what a loss it was to lose such a talent. When he did reappear, it was with The Thin Red Line, an adaptation of James Jones’s World War II novel of the same name. The reaction to the film was one of puzzlement, after all it came after Spielberg’s Saving Private Ryan, which moved audiences to the core, but The Thin Red Line was a completely different take on the subject. War it seemed to say was much more than just a conflict between two groups of men, but is an affront to nature, and in turn an affront to God. Malick cannot resist showing the colourful wildlife around the soldiers, or capturing the light streaming the leaves of the trees. It’s as if God is watching these strange human beings’ intent on destroying all that is good in the world. It is this that is the spiritual heart of his movies and it is there in Song to Song but it takes over two hours to arrive. For the problem is not the message but how it is delivered. Terrence Malick has a unique method in making his films which appear that they are improvised but they are written as screenplays and actors are often told to deliver their lines and then to do the take again without the dialogue but by showing it in their expressions. Many actors find this an interesting contrast to the way they would normally perform and has become another trademark of the director. Ryan Gosling who plays BV in Song to Song, said that there was no script at all. This is obvious when you see the movie but let us just look at the storyline. Faye (Rooney Mara) a songwriter, is attempting to get her life together while at the SXSW festival in Austin, Texas. Her affections are divided between Cook (Michael Fassbender) a music producer and fellow writer BV (Ryan Gosling). There are numerous cameos from Holly Hunter, Cate 12