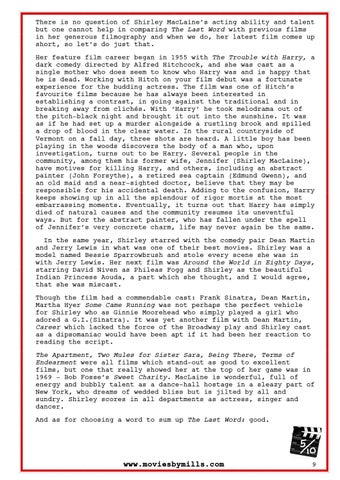 There is no question of Shirley MacLaine’s acting ability and talent but one cannot help in comparing The Last Word with previous films in her generous filmography and when we do, her latest film comes up short, so let’s do just that. Her feature film career began in 1955 with The Trouble with Harry, a dark comedy directed by Alfred Hitchcock, and she was cast as a single mother who does seem to know who Harry was and is happy that he is dead. Working with Hitch on your film debut was a fortunate experience for the budding actress. The film was one of Hitch’s favourite films because he has always been interested in establishing a contrast, in going against the traditional and in breaking away from clichés. With ‘Harry’ he took melodrama out of the pitch-black night and brought it out into the sunshine. It was as if he had set up a murder alongside a rustling brook and spilled a drop of blood in the clear water. In the rural countryside of Vermont on a fall day, three shots are heard. A little boy has been playing in the woods discovers the body of a man who, upon investigation, turns out to be Harry. Several people in the community, among them his former wife, Jennifer (Shirley MacLaine), have motives for killing Harry, and others, including an abstract painter (John Forsythe), a retired sea captain (Edmund Gwenn), and an old maid and a near-sighted doctor, believe that they may be responsible for his accidental death. Adding to the confusion, Harry keeps showing up in all the splendour of rigor mortis at the most embarrassing moments. Eventually, it turns out that Harry has simply died of natural causes and the community resumes its uneventful ways. But for the abstract painter, who has fallen under the spell of Jennifer’s very concrete charm, life may never again be the same.

In the same year, Shirley starred with the comedy pair Dean Martin and Jerry Lewis in what was one of their best movies. Shirley was a model named Bessie Sparrowbrush and stole every scene she was in with Jerry Lewis. Her next film was Around the World in Eighty Days, starring David Niven as Phileas Fogg and Shirley as the beautiful Indian Princess Aouda, a part which she thought, and I would agree, that she was miscast. Though the film had a commendable cast: Frank Sinatra, Dean Martin, Martha Hyer Some Came Running was not perhaps the perfect vehicle for Shirley who as Ginnie Moorehead who simply played a girl who adored a G.I.(Sinatra). It was yet another film with Dean Martin, Career which lacked the force of the Broadway play and Shirley cast as a dipsomaniac would have been apt if it had been her reaction to reading the script. The Apartment, Two Mules for Sister Sara, Being There, Terms of Endearment were all films which stand-out as good to excellent films, but one that really showed her at the top of her game was in 1969 – Bob Fosse’s Sweet Charity. MacLaine is wonderful, full of energy and bubbly talent as a dance-hall hostage in a sleazy part of New York, who dreams of wedded bliss but is jilted by all and sundry. Shirley scores in all departments as actress, singer and dancer. And as for choosing a word to sum up The Last Word: good.