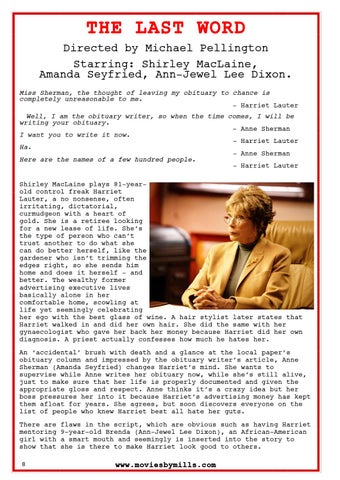 THE LAST WORD Directed by Michael Pellington Starring: Shirley MacLaine, Amanda Seyfried, Ann-Jewel Lee Dixon. Miss Sherman, the thought of leaving my obituary to chance is completely unreasonable to me. - Harriet Lauter Well, I am the obituary writer, so when the time comes, I will be writing your obituary. - Anne Sherman I want you to write it now. - Harriet Lauter Ha. - Anne Sherman Here are the names of a few hundred people. - Harriet Lauter Shirley MacLaine plays 81-yearold control freak Harriet Lauter, a no nonsense, often irritating, dictatorial, curmudgeon with a heart of gold. She is a retiree looking for a new lease of life. She’s the type of person who can’t trust another to do what she can do better herself, like the gardener who isn’t trimming the edges right, so she sends him home and does it herself – and better. The wealthy former advertising executive lives basically alone in her comfortable home, scowling at life yet seemingly celebrating her ego with the best glass of wine. A hair stylist later states that Harriet walked in and did her own hair. She did the same with her gynaecologist who gave her back her money because Harriet did her own diagnosis. A priest actually confesses how much he hates her. An ‘accidental’ brush with death and a glance at the local paper’s obituary column and impressed by the obituary writer’s article, Anne Sherman (Amanda Seyfried) changes Harriet’s mind. She wants to supervise while Anne writes her obituary now, while she’s still alive, just to make sure that her life is properly documented and given the appropriate gloss and respect. Anne thinks it’s a crazy idea but her boss pressures her into it because Harriet’s advertising money has kept them afloat for years. She agrees, but soon discovers everyone on the list of people who knew Harriet best all hate her guts. There are mentoring girl with show that 8

flaws in the script, which are obvious such as having Harriet 9-year-old Brenda (Ann-Jewel Lee Dixon), an African-American a smart mouth and seemingly is inserted into the story to she is there to make Harriet look good to others.