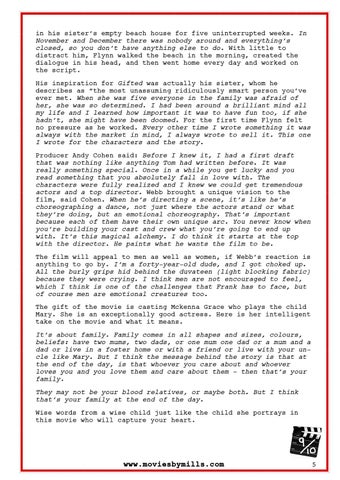 in his sister’s empty beach house for five uninterrupted weeks. In November and December there was nobody around and everything’s closed, so you don’t have anything else to do. With little to distract him, Flynn walked the beach in the morning, created the dialogue in his head, and then went home every day and worked on the script. His inspiration for Gifted was actually his sister, whom he describes as “the most unassuming ridiculously smart person you’ve ever met. When she was five everyone in the family was afraid of her, she was so determined. I had been around a brilliant mind all my life and I learned how important it was to have fun too, if she hadn’t, she might have been doomed. For the first time Flynn felt no pressure as he worked. Every other time I wrote something it was always with the market in mind, I always wrote to sell it. This one I wrote for the characters and the story. Producer Andy Cohen said: Before I knew it, I had a first draft that was nothing like anything Tom had written before. It was really something special. Once in a while you get lucky and you read something that you absolutely fall in love with. The characters were fully realized and I knew we could get tremendous actors and a top director. Webb brought a unique vision to the film, said Cohen. When he’s directing a scene, it’s like he’s choreographing a dance, not just where the actors stand or what they’re doing, but an emotional choreography. That’s important because each of them have their own unique arc. You never know when you’re building your cast and crew what you’re going to end up with. It’s this magical alchemy. I do think it starts at the top with the director. He paints what he wants the film to be. The film will appeal to men as well as women, if Webb’s reaction is anything to go by. I’m a forty-year-old dude, and I got choked up. All the burly grips hid behind the duvateen (light blocking fabric) because they were crying. I think men are not encouraged to feel, which I think is one of the challenges that Frank has to face, but of course men are emotional creatures too. The gift of the movie is casting Mckenna Grace who plays the child Mary. She is an exceptionally good actress. Here is her intelligent take on the movie and what it means. It’s about family. Family comes in all shapes and sizes, colours, beliefs: have two mums, two dads, or one mum one dad or a mum and a dad or live in a foster home or with a friend or live with your uncle like Mary. But I think the message behind the story is that at the end of the day, is that whoever you care about and whoever loves you and you love them and care about them – then that’s your family. They may not be your blood relatives, or maybe both. But I think that’s your family at the end of the day. Wise words from a wise child just like the child she portrays in this movie who will capture your heart.