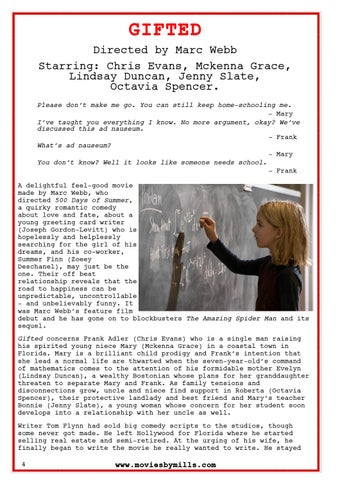 GIFTED Directed by Marc Webb Starring: Chris Evans, Mckenna Grace, Lindsay Duncan, Jenny Slate, Octavia Spencer. Please don’t make me go. You can still keep home-schooling me. - Mary I’ve taught you everything I know. No more argument, okay? We’ve discussed this ad nauseum. - Frank What’s ad nauseum? - Mary You don’t know? Well it looks like someone needs school. - Frank A delightful feel-good movie made by Marc Webb, who directed 500 Days of Summer, a quirky romantic comedy about love and fate, about a young greeting card writer (Joseph Gordon-Levitt) who is hopelessly and helplessly searching for the girl of his dreams, and his co-worker, Summer Finn (Zoeey Deschanel), may just be the one. Their off beat relationship reveals that the road to happiness can be unpredictable, uncontrollable – and unbelievably funny. It was Marc Webb’s feature film debut and he has gone on to blockbusters The Amazing Spider Man and its sequel.

Gifted concerns Frank Adler (Chris Evans) who is a single man raising his spirited young niece Mary (Mckenna Grace) in a coastal town in Florida. Mary is a brilliant child prodigy and Frank’s intention that she lead a normal life are thwarted when the seven-year-old’s command of mathematics comes to the attention of his formidable mother Evelyn (Lindsay Duncan), a wealthy Bostonian whose plans for her granddaughter threaten to separate Mary and Frank. As family tensions and disconnections grow, uncle and niece find support in Roberta (Octavia Spencer), their protective landlady and best friend and Mary’s teacher Bonnie (Jenny Slate), a young woman whose concern for her student soon develops into a relationship with her uncle as well. Writer Tom Flynn had sold big comedy scripts to the studios, though some never got made. He left Hollywood for Florida where he started selling real estate and semi-retired. At the urging of his wife, he finally began to write the movie he really wanted to write. He stayed 4