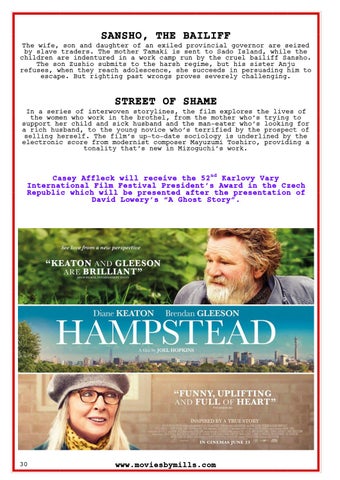 SANSHO, THE BAILIFF The wife, son and daughter of an exiled provincial governor are seized by slave traders. The mother Tamaki is sent to Sado Island, while the children are indentured in a work camp run by the cruel bailiff Sansho. The son Zushio submits to the harsh regime, but his sister Anju refuses, when they reach adolescence, she succeeds in persuading him to escape. But righting past wrongs proves severely challenging.

STREET OF SHAME In a series of interwoven storylines, the film explores the lives of the women who work in the brothel, from the mother who’s trying to support her child and sick husband and the man-eater who’s looking for a rich husband, to the young novice who’s terrified by the prospect of selling herself. The film’s up-to-date sociology is underlined by the electronic score from modernist composer Mayuzumi Toshiro, providing a tonality that’s new in Mizoguchi’s work.

Casey Affleck will receive the 52nd Karlovy Vary International Film Festival President’s Award in the Czech Republic which will be presented after the presentation of David Lowery’s “A Ghost Story”.