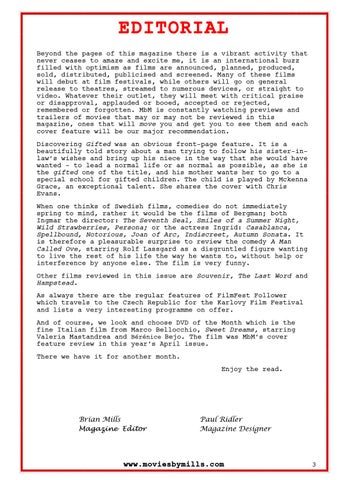 EDITORIAL Beyond the pages of this magazine there is a vibrant activity that never ceases to amaze and excite me, it is an international buzz filled with optimism as films are announced, planned, produced, sold, distributed, publicised and screened. Many of these films will debut at film festivals, while others will go on general release to theatres, streamed to numerous devices, or straight to video. Whatever their outlet, they will meet with critical praise or disapproval, applauded or booed, accepted or rejected, remembered or forgotten. MbM is constantly watching previews and trailers of movies that may or may not be reviewed in this magazine, ones that will move you and get you to see them and each cover feature will be our major recommendation. Discovering Gifted was an obvious front-page feature. It is a beautifully told story about a man trying to follow his sister-inlaw’s wishes and bring up his niece in the way that she would have wanted - to lead a normal life or as normal as possible, as she is the gifted one of the title, and his mother wants her to go to a special school for gifted children. The child is played by Mckenna Grace, an exceptional talent. She shares the cover with Chris Evans. When one thinks of Swedish films, comedies do not immediately spring to mind, rather it would be the films of Bergman; both Ingmar the director: The Seventh Seal, Smiles of a Summer Night, Wild Strawberries, Persona; or the actress Ingrid: Casablanca, Spellbound, Notorious, Joan of Arc, Indiscreet, Autumn Sonata. It is therefore a pleasurable surprise to review the comedy A Man Called Ove, starring Rolf Lassgard as a disgruntled figure wanting to live the rest of his life the way he wants to, without help or interference by anyone else. The film is very funny. Other films reviewed in this issue are Souvenir, The Last Word and Hampstead. As always there are the regular features of FilmFest Follower which travels to the Czech Republic for the Karlovy Film Festival and lists a very interesting programme on offer. And of course, we look fine Italian film from Valeria Mastandrea and feature review in this

and choose DVD of the Month which is the Marco Bellocchio, Sweet Dreams, starring Bérénice Bejo. The film was MbM’s cover year’s April issue.

There we have it for another month. Enjoy the read.