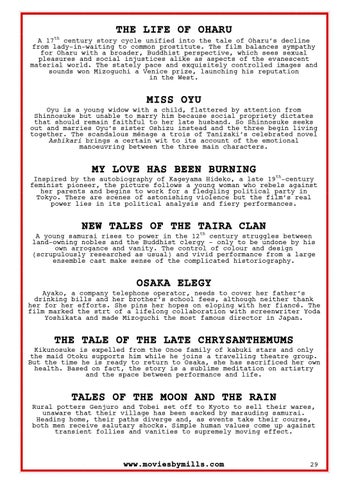 THE LIFE OF OHARU th

A 17 century story cycle unified into the tale of Oharu’s decline from lady-in-waiting to common prostitute. The film balances sympathy for Oharu with a broader, Buddhist perspective, which sees sexual pleasures and social injustices alike as aspects of the evanescent material world. The stately pace and exquisitely controlled images and sounds won Mizoguchi a Venice prize, launching his reputation in the West.

MISS OYU Oyu is a young widow with a child, flattered by attention from Shinnosuke but unable to marry him because social propriety dictates that should remain faithful to her late husband. So Shinnosuke seeks out and marries Oyu’s sister Oshizu instead and the three begin living together. The scandalous ménage a trois of Tanizaki’s celebrated novel Ashikari brings a certain wit to its account of the emotional manoeuvring between the three main characters.

MY LOVE HAS BEEN BURNING Inspired by the autobiography of Kageyama Hideko, a late 19th-century feminist pioneer, the picture follows a young woman who rebels against her parents and begins to work for a fledgling political party in Tokyo. There are scenes of astonishing violence but the film’s real power lies in its political analysis and fiery performances.

NEW TALES OF THE TAIRA CLAN A young samurai rises to power in the 12th century struggles between land-owning nobles and the Buddhist clergy – only to be undone by his own arrogance and vanity. The control of colour and design (scrupulously researched as usual) and vivid performance from a large ensemble cast make sense of the complicated historiography.

OSAKA ELEGY Ayako, a company telephone operator, needs to cover her father’s drinking bills and her brother’s school fees, although neither thank her for her efforts. She pins her hopes on eloping with her fiancé. The film marked the strt of a lifelong collaboration with screenwriter Yoda Yoshikata and made Mizoguchi the most famous director in Japan.

THE TALE OF THE LATE CHRYSANTHEMUMS Kikunosuke is expelled from the Onoe family of kabuki stars and only the maid Otoku supports him while he joins a travelling theatre group. But the time he is ready to return to Osaka, she has sacrificed her own health. Based on fact, the story is a sublime meditation on artistry and the space between performance and life.

TALES OF THE MOON AND THE RAIN Rural potters Genjuro and Tobei set off to Kyoto to sell their wares, unaware that their village has been sacked by marauding samurai. Heading home, their paths diverge and, as events take their course, both men receive salutary shocks. Simple human values come up against transient follies and vanities to supremely moving effect.