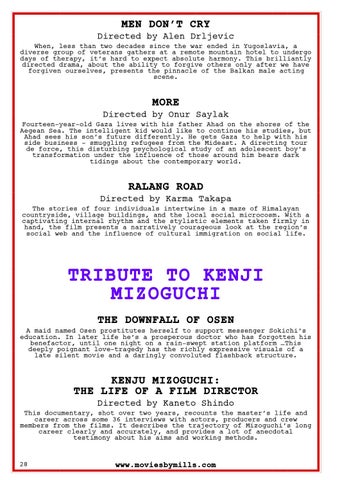 MEN DON’T CRY Directed by Alen Drljevic When, less than two decades since the war ended in Yugoslavia, a diverse group of veterans gathers at a remote mountain hotel to undergo days of therapy, it’s hard to expect absolute harmony. This brilliantly directed drama, about the ability to forgive others only after we have forgiven ourselves, presents the pinnacle of the Balkan male acting scene.

MORE Directed by Onur Saylak Fourteen-year-old Gaza lives with his father Ahad on the shores of the Aegean Sea. The intelligent kid would like to continue his studies, but Ahad sees his son’s future differently. He gets Gaza to help with his side business – smuggling refugees from the Mideast. A directing tour de force, this disturbing psychological study of an adolescent boy’s transformation under the influence of those around him bears dark tidings about the contemporary world.

RALANG ROAD Directed by Karma Takapa The stories of four individuals intertwine in a maze of Himalayan countryside, village buildings, and the local social microcosm. With a captivating internal rhythm and the stylistic elements taken firmly in hand, the film presents a narratively courageous look at the region’s social web and the influence of cultural immigration on social life.

TRIBUTE TO KENJI MIZOGUCHI THE DOWNFALL OF OSEN A maid named Osen prostitutes herself to support messenger Sokichi’s education. In later life he’s a prosperous doctor who has forgotten his benefactor, until one night on a rain-swept station platform …This deeply poignant love-tragedy has the richly expressive visuals of a late silent movie and a daringly convoluted flashback structure.

KENJU MIZOGUCHI: THE LIFE OF A FILM DIRECTOR Directed by Kaneto Shindo This documentary, shot over two years, recounts the master’s life and career across some 36 interviews with actors, producers and crew members from the films. It describes the trajectory of Mizoguchi’s long career clearly and accurately, and provides a lot of anecdotal testimony about his aims and working methods.