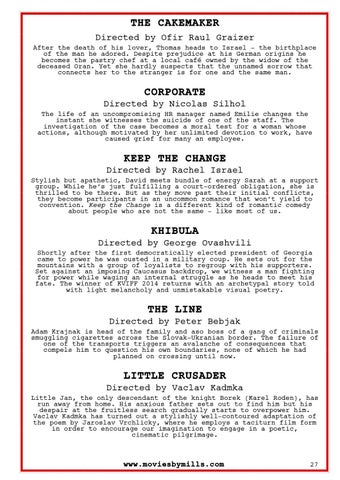 THE CAKEMAKER Directed by Ofir Raul Graizer After the death of his lover, Thomas heads to Israel – the birthplace of the man he adored. Despite prejudice at his German origins he becomes the pastry chef at a local café owned by the widow of the deceased Oran. Yet she hardly suspects that the unnamed sorrow that connects her to the stranger is for one and the same man.

CORPORATE Directed by Nicolas Silhol The life of an uncompromising HR manager named Emilie changes the instant she witnesses the suicide of one of the staff. The investigation of the case becomes a moral test for a woman whose actions, although motivated by her unlimited devotion to work, have caused grief for many an employee.

KEEP THE CHANGE Directed by Rachel Israel Stylish but apathetic, David meets bundle of energy Sarah at a support group. While he’s just fulfilling a court-ordered obligation, she is thrilled to be there. But as they move past their initial conflicts, they become participants in an uncommon romance that won’t yield to convention. Keep the Change is a different kind of romantic comedy about people who are not the same – like most of us.

KHIBULA Directed by George Ovashvili Shortly after the first democratically elected president of Georgia came to power he was ousted in a military coup. He sets out for the mountains with a group of loyalists to regroup with his supporters. Set against an imposing Caucasus backdrop, we witness a man fighting for power while waging an internal struggle as he heads to meet his fate. The winner of KVIFF 2014 returns with an archetypal story told with light melancholy and unmistakable visual poetry.

THE LINE Directed by Peter Bebjak Adam Krajnak is head of the family and aso boss of a gang of criminals smuggling cigarettes across the Slovak-Ukranian border. The failure of one of the transports triggers an avalanche of consequences that compels him to question his own boundaries, none of which he had planned on crossing until now.

LITTLE CRUSADER Directed by Vaclav Kadmka Little Jan, the only descendant of the knight Borek (Karel Roden), has run away from home. His anxious father sets out to find him but his despair at the fruitless search gradually starts to overpower him. Vaclav Kadmka has turned out a stylishly well-contoured adaptation of the poem by Jaroslav Vrchlicky, where he employs a taciturn film form in order to encourage our imagination to engage in a poetic, cinematic pilgrimage.