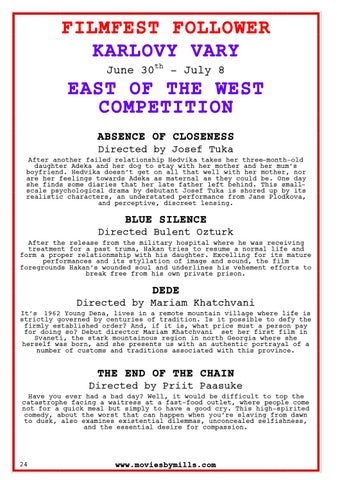 EAST OF THE WEST COMPETITION ABSENCE OF CLOSENESS Directed by Josef Tuka After another failed relationship Hedvika takes her three-month-old daughter Adeka and her dog to stay with her mother and her mum’s boyfriend. Hedvika doesn’t get on all that well with her mother, nor are her feelings towards Adeka as maternal as they could be. One day she finds some diaries that her late father left behind. This smallscale psychological drama by debutant Josef Tuka is shored up by its realistic characters, an understated performance from Jane Plodkova, and perceptive, discreet lensing.

BLUE SILENCE Directed Bulent Ozturk After the release from the military hospital where he was receiving treatment for a past truma, Hakan tries to resume a normal life and form a proper relationmship with his daughter. Excelling for its mature performances and its styllation of image and sound, the film foregrounds Hakan’s wounded soul and underlines his vehement efforts to break free from his own private prison.

DEDE Directed by Mariam Khatchvani It’s 1962 Young Dena, lives in a remote mountain village where life is strictly governed by centuries of tradition. Is it possible to defy the firmly established order? And, if it is, what price must a person pay for doing so? Debut director Mariam Khatchvani set her first film in Svaneti, the stark mountainous region in north Georgia where she herself was born, and she presents us with an authentic portrayal of a number of customs and traditions associated with this province.

THE END OF THE CHAIN Directed by Priit Paasuke Have you ever had a bad day? Well, it would be difficult to top the catastrophe facing a waitress at a fast-food outlet, where people come not for a quick meal but simply to have a good cry. This high-spirited comedy, about the worst that can happen when you’re slaving from dawn to dusk, also examines existential dilemmas, unconcealed selfishness, and the essential desire for compassion.