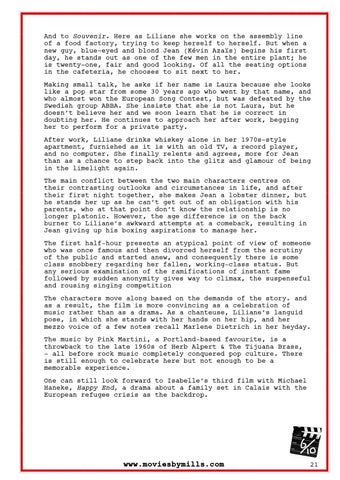 And to Souvenir. Here as Liliane she works on the assembly line of a food factory, trying to keep herself to herself. But when a new guy, blue-eyed and blond Jean (Kévin Azaïs) begins his first day, he stands out as one of the few men in the entire plant; he is twenty-one, fair and good looking. Of all the seating options in the cafeteria, he chooses to sit next to her. Making small talk, he asks if her name is Laura because she looks like a pop star from some 30 years ago who went by that name, and who almost won the European Song Contest, but was defeated by the Swedish group ABBA. She insists that she is not Laura, but he doesn’t believe her and we soon learn that he is correct in doubting her. He continues to approach her after work, begging her to perform for a private party.

After work, Liliane drinks whiskey alone in her 1970s-style apartment, furnished as it is with an old TV, a record player, and no computer. She finally relents and agrees, more for Jean than as a chance to step back into the glitz and glamour of being in the limelight again. The main conflict between the two main characters centres on their contrasting outlooks and circumstances in life, and after their first night together, she makes Jean a lobster dinner, but he stands her up as he can’t get out of an obligation with his parents, who at that point don’t know the relationship is no longer platonic. However, the age difference is on the back burner to Liliane’s awkward attempts at a comeback, resulting in Jean giving up his boxing aspirations to manage her.

The first half-hour presents an atypical point of view of someone who was once famous and then divorced herself from the scrutiny of the public and started anew, and consequently there is some class snobbery regarding her fallen, working-class status. But any serious examination of the ramifications of instant fame followed by sudden anonymity gives way to climax, the suspenseful and rousing singing competition The characters move along based on the demands of the story. and as a result, the film is more convincing as a celebration of music rather than as a drama. As a chanteuse, Liliane’s languid pose, in which she stands with her hands on her hip, and her mezzo voice of a few notes recall Marlene Dietrich in her heyday.

The music by Pink Martini, a Portland-based favourite, is a throwback to the late 1960s of Herb Alpert & The Tijuana Brass, – all before rock music completely conquered pop culture. There is still enough to celebrate here but not enough to be a memorable experience. One can still look forward to Isabelle’s third film with Michael Haneke, Happy End, a drama about a family set in Calais with the European refugee crisis as the backdrop.