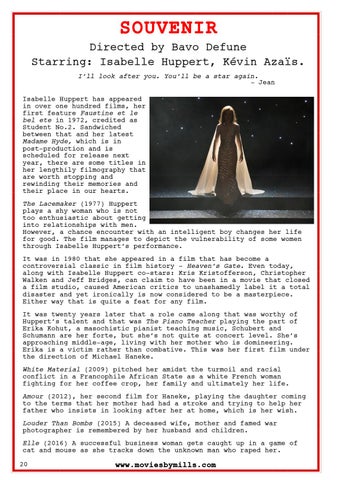 SOUVENIR Directed by Bavo Defune Starring: Isabelle Huppert, Kévin Azaïs. I’ll look after you. You’ll be a star again. - Jean Isabelle Huppert has appeared in over one hundred films, her first feature Faustine et le bel ete in 1972, credited as Student No.2. Sandwiched between that and her latest Madame Hyde, which is in post-production and is scheduled for release next year, there are some titles in her lengthily filmography that are worth stopping and rewinding their memories and their place in our hearts. The Lacemaker (1977) Huppert plays a shy woman who is not too enthusiastic about getting into relationships with men. However, a chance encounter with an intelligent boy changes her life for good. The film manages to depict the vulnerability of some women through Isabelle Huppert’s performance. It was in 1980 that she appeared in a film that has become a controversial classic in film history – Heaven’s Gate. Even today, along with Isabelle Huppert co-stars: Kris Kristofferson, Christopher Walken and Jeff Bridges, can claim to have been in a movie that closed a film studio, caused American critics to unashamedly label it a total disaster and yet ironically is now considered to be a masterpiece. Either way that is quite a feat for any film. It was twenty years later that a role came along that was worthy of Huppert’s talent and that was The Piano Teacher playing the part of Erika Kohut, a masochistic pianist teaching music, Schubert and Schumann are her forte, but she’s not quite at concert level. She’s approaching middle-age, living with her mother who is domineering. Erika is a victim rather than combative. This was her first film under the direction of Michael Haneke. White Material (2009) pitched her amidst the turmoil and racial conflict in a Francophile African State as a white French woman fighting for her coffee crop, her family and ultimately her life. Amour (2012), her second film for Haneke, playing the daughter coming to the terms that her mother had had a stroke and trying to help her father who insists in looking after her at home, which is her wish. Louder Than Bombs (2015) A deceased wife, mother and famed war photographer is remembered by her husband and children. Elle (2016) A successful business woman gets caught up in a game of cat and mouse as she tracks down the unknown man who raped her. 20