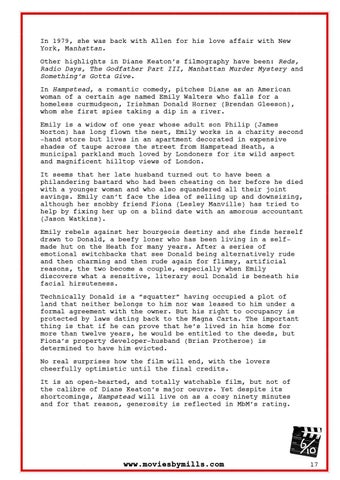 In 1979, she was back with Allen for his love affair with New York, Manhattan. Other highlights in Diane Keaton’s filmography have been: Reds, Radio Days, The Godfather Part III, Manhattan Murder Mystery and Something’s Gotta Give. In Hampstead, a romantic comedy, pitches Diane as an American woman of a certain age named Emily Walters who falls for a homeless curmudgeon, Irishman Donald Horner (Brendan Gleeson), whom she first spies taking a dip in a river. Emily is a widow of one year whose adult son Philip (James Norton) has long flown the nest, Emily works in a charity second -hand store but lives in an apartment decorated in expensive shades of taupe across the street from Hampstead Heath, a municipal parkland much loved by Londoners for its wild aspect and magnificent hilltop views of London. It seems that her late husband turned out to have been a philandering bastard who had been cheating on her before he died with a younger woman and who also squandered all their joint savings. Emily can’t face the idea of selling up and downsizing, although her snobby friend Fiona (Lesley Manville) has tried to help by fixing her up on a blind date with an amorous accountant (Jason Watkins). Emily rebels against her bourgeois destiny and she finds herself drawn to Donald, a beefy loner who has been living in a selfmade hut on the Heath for many years. After a series of emotional switchbacks that see Donald being alternatively rude and then charming and then rude again for flimsy, artificial reasons, the two become a couple, especially when Emily discovers what a sensitive, literary soul Donald is beneath his facial hirsuteness. Technically Donald is a “squatter” having occupied a plot of land that neither belongs to him nor was leased to him under a formal agreement with the owner. But his right to occupancy is protected by laws dating back to the Magna Carta. The important thing is that if he can prove that he’s lived in his home for more than twelve years, he would be entitled to the deeds, but Fiona’s property developer-husband (Brian Protheroe) is determined to have him evicted. No real surprises how the film will end, with the lovers cheerfully optimistic until the final credits. It is an open-hearted, and totally watchable film, but not of the calibre of Diane Keaton’s major oeuvre. Yet despite its shortcomings, Hampstead will live on as a cosy ninety minutes and for that reason, generosity is reflected in MbM’s rating.