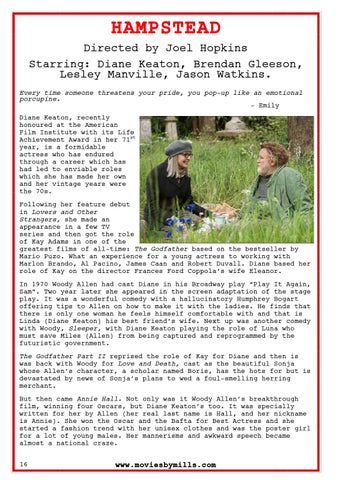 HAMPSTEAD Directed by Joel Hopkins Starring: Diane Keaton, Brendan Gleeson, Lesley Manville, Jason Watkins. Every time someone threatens your pride, you pop-up like an emotional porcupine. - Emily Diane Keaton, recently honoured at the American Film Institute with its Life Achievement Award in her 71st year, is a formidable actress who has endured through a career which has had led to enviable roles which she has made her own and her vintage years were the 70s. Following her feature debut in Lovers and Other Strangers, she made an appearance in a few TV series and then got the role of Kay Adams in one of the greatest films of all-time: The Godfather based on the bestseller by Mario Puzo. What an experience for a young actress to working with Marlon Brando, Al Pacino, James Caan and Robert Duvall. Diane based her role of Kay on the director Frances Ford Coppola’s wife Eleanor. In 1970 Woody Allen had cast Diane in his Broadway play “Play It Again, Sam”. Two year later she appeared in the screen adaptation of the stage play. It was a wonderful comedy with a hallucinatory Humphrey Bogart offering tips to Allen on how to make it with the ladies. He finds that there is only one woman he feels himself comfortable with and that is Linda (Diane Keaton) his best friend’s wife. Next up was another comedy with Woody, Sleeper, with Diane Keaton playing the role of Luna who must save Miles (Allen) from being captured and reprogrammed by the futuristic government. The Godfather was back with whose Allen’s devastated by merchant.

Part II reprised the role of Kay for Diane and then is Woody for Love and Death, cast as the beautiful Sonja character, a scholar named Boris, has the hots for but is news of Sonja’s plans to wed a foul-smelling herring

But then came Annie Hall. Not only was it Woody Allen’s breakthrough film, winning four Oscars, but Diane Keaton’s too. It was specially written for her by Allen (her real last name is Hall, and her nickname is Annie). She won the Oscar and the Bafta for Best Actress and she started a fashion trend with her unisex clothes and was the poster girl for a lot of young males. Her mannerisms and awkward speech became almost a national craze. 16