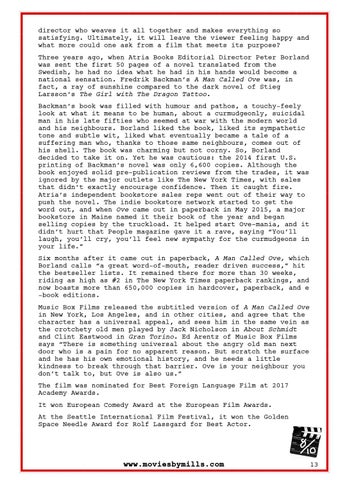 director who weaves it all together and makes everything so satisfying. Ultimately, it will leave the viewer feeling happy and what more could one ask from a film that meets its purpose? Three years ago, when Atria Books Editorial Director Peter Borland was sent the first 50 pages of a novel translated from the Swedish, he had no idea what he had in his hands would become a national sensation. Fredrik Backman’s A Man Called Ove was, in fact, a ray of sunshine compared to the dark novel of Stieg Larsson’s The Girl with The Dragon Tattoo. Backman’s book was filled with humour and pathos, a touchy-feely look at what it means to be human, about a curmudgeonly, suicidal man in his late fifties who seemed at war with the modern world and his neighbours. Borland liked the book, liked its sympathetic tone and subtle wit, liked what eventually became a tale of a suffering man who, thanks to those same neighbours, comes out of his shell. The book was charming but not corny. So, Borland decided to take it on. Yet he was cautious: the 2014 first U.S. printing of Backman’s novel was only 6,600 copies. Although the book enjoyed solid pre-publication reviews from the trades, it was ignored by the major outlets like The New York Times, with sales that didn’t exactly encourage confidence. Then it caught fire. Atria’s independent bookstore sales reps went out of their way to push the novel. The indie bookstore network started to get the word out, and when Ove came out in paperback in May 2015, a major bookstore in Maine named it their book of the year and began selling copies by the truckload. It helped start Ove-mania, and it didn’t hurt that People magazine gave it a rave, saying “You’ll laugh, you’ll cry, you’ll feel new sympathy for the curmudgeons in your life.” Six months after it came out in paperback, A Man Called Ove, which Borland calls “a great word-of-mouth, reader driven success,” hit the bestseller lists. It remained there for more than 30 weeks, riding as high as #2 in The New York Times paperback rankings, and now boasts more than 650,000 copies in hardcover, paperback, and e -book editions. Music Box Films released the subtitled version of A Man Called Ove in New York, Los Angeles, and in other cities, and agree that the character has a universal appeal, and sees him in the same vein as the crotchety old men played by Jack Nicholson in About Schmidt and Clint Eastwood in Gran Torino. Ed Arentz of Music Box Films says “There is something universal about the angry old man next door who is a pain for no apparent reason. But scratch the surface and he has his own emotional history, and he needs a little kindness to break through that barrier. Ove is your neighbour you don’t talk to, but Ove is also us.” The film was nominated for Best Foreign Language Film at 2017 Academy Awards. It won European Comedy Award at the European Film Awards. At the Seattle International Film Festival, it won the Golden Space Needle Award for Rolf Lassgard for Best Actor.