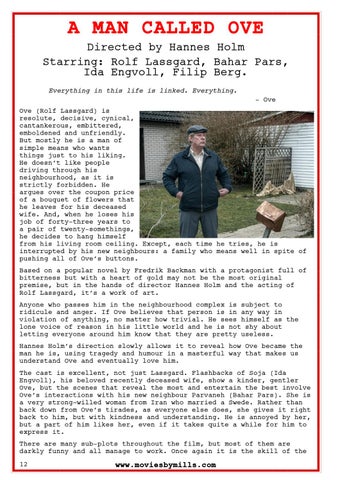 A MAN CALLED OVE Directed by Hannes Holm Starring: Rolf Lassgard, Bahar Pars, Ida Engvoll, Filip Berg. Everything in this life is linked. Everything. - Ove Ove (Rolf Lassgard) is resolute, decisive, cynical, cantankerous, embittered, emboldened and unfriendly. But mostly he is a man of simple means who wants things just to his liking. He doesn’t like people driving through his neighbourhood, as it is strictly forbidden. He argues over the coupon price of a bouquet of flowers that he leaves for his deceased wife. And, when he loses his job of forty-three years to a pair of twenty-somethings, he decides to hang himself from his living room ceiling. Except, each time he tries, he is interrupted by his new neighbours: a family who means well in spite of pushing all of Ove’s buttons. Based on a popular novel by Fredrik Backman with a protagonist full of bitterness but with a heart of gold may not be the most original premise, but in the hands of director Hannes Holm and the acting of Rolf Lassgard, it’s a work of art. Anyone who passes him in the neighbourhood complex is subject to ridicule and anger. If Ove believes that person is in any way in violation of anything, no matter how trivial. He sees himself as the lone voice of reason in his little world and he is not shy about letting everyone around him know that they are pretty useless. Hannes Holm’s direction slowly allows it to reveal how Ove became the man he is, using tragedy and humour in a masterful way that makes us understand Ove and eventually love him. The cast is excellent, not just Lassgard. Flashbacks of Soja (Ida Engvoll), his beloved recently deceased wife, show a kinder, gentler Ove, but the scenes that reveal the most and entertain the best involve Ove’s interactions with his new neighbour Parvaneh (Bahar Pars). She is a very strong-willed woman from Iran who married a Swede. Rather than back down from Ove’s tirades, as everyone else does, she gives it right back to him, but with kindness and understanding. He is annoyed by her, but a part of him likes her, even if it takes quite a while for him to express it. There are many sub-plots throughout the film, but most of them are darkly funny and all manage to work. Once again it is the skill of the 12