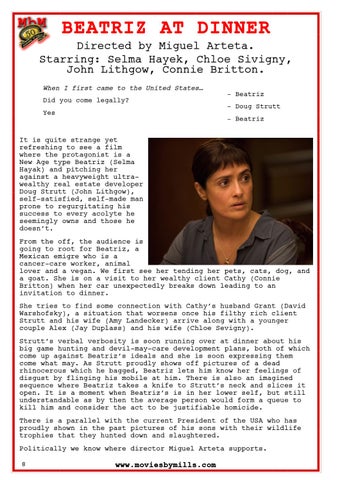 It is quite strange yet refreshing to see a film where the protagonist is a New Age type Beatriz (Selma Hayak) and pitching her against a heavyweight ultrawealthy real estate developer Doug Strutt (John Lithgow), self-satisfied, self-made man prone to regurgitating his success to every acolyte he seemingly owns and those he doesn’t. From the off, the audience is going to root for Beatriz, a Mexican emigre who is a cancer-care worker, animal lover and a vegan. We first see her tending her pets, cats, dog, and a goat. She is on a visit to her wealthy client Cathy (Connie Britton) when her car unexpectedly breaks down leading to an invitation to dinner. She tries to find some connection with Cathy’s husband Grant (David Warshofsky), a situation that worsens once his filthy rich client Strutt and his wife (Amy Landecker) arrive along with a younger couple Alex (Jay Duplass) and his wife (Chloe Sevigny).

Strutt’s verbal verbosity is soon running over at dinner about his big game hunting and devil-may-care development plans, both of which come up against Beatriz’s ideals and she is soon expressing them come what may. As Strutt proudly shows off pictures of a dead rhinocerous which he bagged, Beatriz lets him know her feelings of disgust by flinging his mobile at him. There is also an imagined sequence where Beatriz takes a knife to Strutt’s neck and slices it open. It is a moment when Beatriz’s is in her lower self, but still understandable as by then the average person would form a queue to kill him and consider the act to be justifiable homicide. There is a parallel with the current President of the USA who has proudly shown in the past pictures of his sons with their wildlife trophies that they hunted down and slaughtered. Politically we know where director Miguel Arteta supports. 8