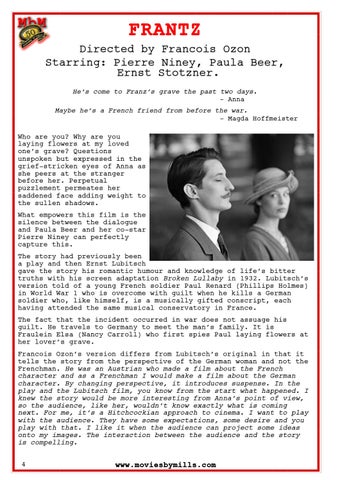 Who are you? Why are you laying flowers at my loved one’s grave? Questions unspoken but expressed in the grief-stricken eyes of Anna as she peers at the stranger before her. Perpetual puzzlement permeates her saddened face adding weight to the sullen shadows. What empowers this film is the silence between the dialogue and Paula Beer and her co-star Pierre Niney can perfectly capture this. The story had previously been a play and then Ernst Lubitsch gave the story his romantic humour and knowledge of life’s bitter truths with his screen adaptation Broken Lullaby in 1932. Lubitsch’s version told of a young French soldier Paul Renard (Phillips Holmes) in World War 1 who is overcome with guilt when he kills a German soldier who, like himself, is a musically gifted conscript, each having attended the same musical conservatory in France. The fact that the incident occurred in war does not assuage his guilt. He travels to Germany to meet the man’s family. It is Fraulein Elsa (Nancy Carroll) who first spies Paul laying flowers at her lover’s grave. Francois Ozon’s version differs from Lubitsch’s original in that it tells the story from the perspective of the German woman and not the Frenchman. He was an Austrian who made a film about the French character and as a Frenchman I would make a film about the German character. By changing perspective, it introduces suspense. In the play and the Lubitsch film, you know from the start what happened. I knew the story would be more interesting from Anna’s point of view, so the audience, like her, wouldn’t know exactly what is coming next. For me, it’s a Hitchcockian approach to cinema. I want to play with the audience. They have some expectations, some desire and you play with that. I like it when the audience can project some ideas onto my images. The interaction between the audience and the story is compelling. 4