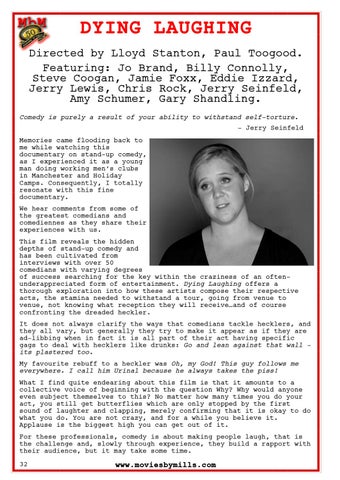 Memories came flooding back to me while watching this documentary on stand-up comedy, as I experienced it as a young man doing working men’s clubs in Manchester and Holiday Camps. Consequently, I totally resonate with this fine documentary. We hear comments from some of the greatest comedians and comediennes as they share their experiences with us.

This film reveals the hidden depths of stand-up comedy and has been cultivated from interviews with over 50 comedians with varying degrees of success searching for the key within the craziness of an oftenunderappreciated form of entertainment. Dying Laughing offers a thorough exploration into how these artists compose their respective acts, the stamina needed to withstand a tour, going from venue to venue, not knowing what reception they will receive…and of course confronting the dreaded heckler. It does not always clarify the ways that comedians tackle hecklers, and they all vary, but generally they try to make it appear as if they are ad-libbing when in fact it is all part of their act having specific gags to deal with hecklers like drunks: Go and lean against that wall – its plastered too. My favourite rebuff to a heckler was Oh, my God! This guy follows me everywhere. I call him Urinal because he always takes the piss! What I find quite endearing about this film is that it amounts to a collective voice of beginning with the question Why? Why would anyone even subject themselves to this? No matter how many times you do your act, you still get butterflies which are only stopped by the first sound of laughter and clapping, merely confirming that it is okay to do what you do. You are not crazy, and for a while you believe it. Applause is the biggest high you can get out of it.

For these professionals, comedy is about making people laugh, that is the challenge and, slowly through experience, they build a rapport with their audience, but it may take some time. 32