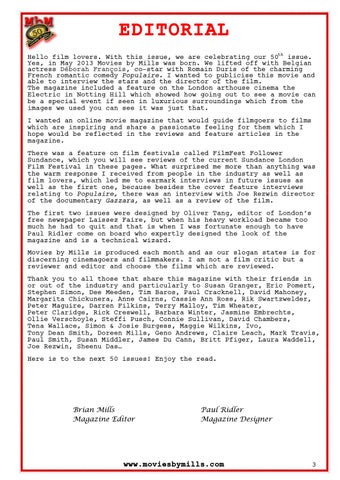 EDITORIAL Hello film lovers. With this issue, we are celebrating our 50th issue. Yes, in May 2013 Movies by Mills was born. We lifted off with Belgian actress Déborah François, co-star with Romain Duris of the charming French romantic comedy Populaire. I wanted to publicise this movie and able to interview the stars and the director of the film. The magazine included a feature on the London arthouse cinema the Electric in Notting Hill which showed how going out to see a movie can be a special event if seen in luxurious surroundings which from the images we used you can see it was just that. I wanted an online movie magazine that would guide filmgoers to films which are inspiring and share a passionate feeling for them which I hope would be reflected in the reviews and feature articles in the magazine. There was a feature on film festivals called FilmFest Follower Sundance, which you will see reviews of the current Sundance London Film Festival in these pages. What surprised me more than anything was the warm response I received from people in the industry as well as film lovers, which led me to earmark interviews in future issues as well as the first one, because besides the cover feature interviews relating to Populaire, there was an interview with Joe Rezwin director of the documentary Gazzara, as well as a review of the film. The first two issues were designed by Oliver Tang, editor of London’s free newspaper Laissez Faire, but when his heavy workload became too much he had to quit and that is when I was fortunate enough to have Paul Ridler come on board who expertly designed the look of the magazine and is a technical wizard. Movies by Mills is produced each month and as our slogan states is for discerning cinemagoers and filmmakers. I am not a film critic but a reviewer and editor and choose the films which are reviewed. Thank you to all those that share this magazine with their friends in or out of the industry and particularly to Susan Granger, Eric Pomert, Stephen Simon, Dee Meeden, Tim Baros, Paul Cracknell, David Mahoney, Margarita Chickunera, Anne Cairns, Cassie Ann Ross, Rik Swartzwelder, Peter Maguire, Darren Filkins, Terry Malloy, Tim Wheater, Peter Claridge, Rick Creswell, Barbara Winter, Jasmine Embrechts, Ollie Verschoyle, Steffi Pusch, Connie Sullivan, David Chambers, Tena Wallace, Simon &amp; Josie Burgess, Maggie Wilkins, Ivo, Tony Dean Smith, Doreen Mills, Geno Andrews, Claire Leach, Mark Travis, Paul Smith, Susan Middler, James Du Cann, Britt Pfiger, Laura Waddell, Joe Rezwin, Sheenu Das… Here is to the next 50 issues! Enjoy the read.