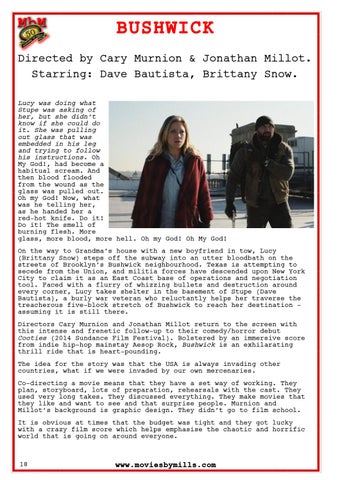 BUSHWICK Directed by Cary Murnion &amp; Jonathan Millot. Starring: Dave Bautista, Brittany Snow. Lucy was doing what Stupe was asking of her, but she didn’t know if she could do it. She was pulling out glass that was embedded in his leg and trying to follow his instructions. Oh My God!, had become a habitual scream. And then blood flooded from the wound as the glass was pulled out. Oh my God! Now, what was he telling her, as he handed her a red-hot knife. Do it! Do it! The smell of burning flesh. More glass, more blood, more hell. Oh my God! Oh My God! On the way to Grandma’s house with a new boyfriend in tow, Lucy (Brittany Snow) steps off the subway into an utter bloodbath on the streets of Brooklyn’s Bushwick neighbourhood. Texas is attempting to secede from the Union, and militia forces have descended upon New York City to claim it as an East Coast base of operations and negotiation tool. Faced with a flurry of whizzing bullets and destruction around every corner, Lucy takes shelter in the basement of Stupe (Dave Bautista), a burly war veteran who reluctantly helps her traverse the treacherous five-block stretch of Bushwick to reach her destination – assuming it is still there. Directors Cary Murnion and Jonathan Millot return to the screen with this intense and frenetic follow-up to their comedy/horror debut Cooties (2014 Sundance Film Festival). Bolstered by an immersive score from indie hip-hop mainstay Aesop Rock, Bushwick is an exhilarating thrill ride that is heart-pounding. The idea for the story was that the USA is always invading other countries, what if we were invaded by our own mercenaries. Co-directing a movie means that they have a set way of working. They plan, storyboard, lots of preparation, rehearsals with the cast. They used very long takes. They discussed everything. They make movies that they like and want to see and that surprise people. Murnion and Millot’s background is graphic design. They didn’t go to film school. It is obvious at times that the budget was tight and they got lucky with a crazy film score which helps emphasise the chaotic and horrific world that is going on around everyone.