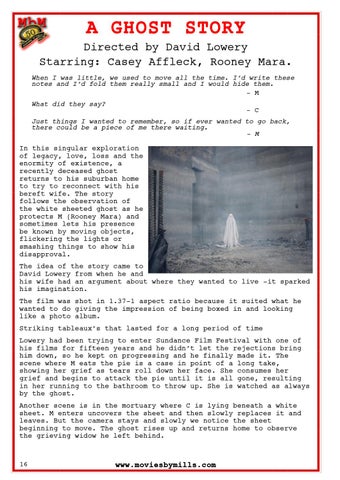 A GHOST STORY Directed by David Lowery Starring: Casey Affleck, Rooney Mara. When I was little, we used to move all the time. I’d write these notes and I’d fold them really small and I would hide them. - M What did they say? - C Just things I wanted to remember, so if ever wanted to go back, there could be a piece of me there waiting. - M

In this singular exploration of legacy, love, loss and the enormity of existence, a recently deceased ghost returns to his suburban home to try to reconnect with his bereft wife. The story follows the observation of the white sheeted ghost as he protects M (Rooney Mara) and sometimes lets his presence be known by moving objects, flickering the lights or smashing things to show his disapproval. The idea of the story came to David Lowery from when he and his wife had an argument about where they wanted to live -it sparked his imagination. The film was shot in 1.37-1 aspect ratio because it suited what he wanted to do giving the impression of being boxed in and looking like a photo album. Striking tableaux’s that lasted for a long period of time

Lowery had been trying to enter Sundance Film Festival with one of his films for fifteen years and he didn’t let the rejections bring him down, so he kept on progressing and he finally made it. The scene where M eats the pie is a case in point of a long take, showing her grief as tears roll down her face. She consumes her grief and begins to attack the pie until it is all gone, resulting in her running to the bathroom to throw up. She is watched as always by the ghost. Another scene is in the mortuary where C is lying beneath a white sheet. M enters uncovers the sheet and then slowly replaces it and leaves. But the camera stays and slowly we notice the sheet beginning to move. The ghost rises up and returns home to observe the grieving widow he left behind.