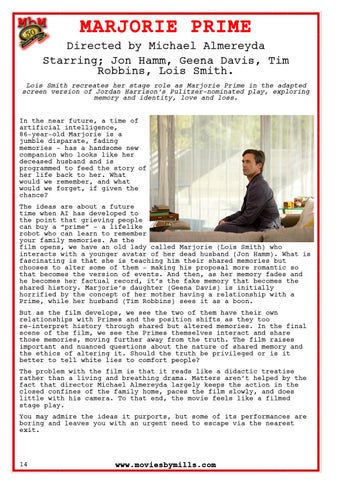 MARJORIE PRIME Directed by Michael Almereyda Starring; Jon Hamm, Geena Davis, Tim Robbins, Lois Smith. Lois Smith recreates her stage role as Marjorie Prime in the adapted screen version of Jordan Harrison’s Pulitzer-nominated play, exploring memory and identity, love and loss. In the near future, a time of artificial intelligence, 86-year-old Marjorie is a jumble disparate, fading memories – has a handsome new companion who looks like her deceased husband and is programmed to feed the story of her life back to her. What would we remember, and what would we forget, if given the chance? The ideas are about a future time when AI has developed to the point that grieving people can buy a “prime” – a lifelike robot who can learn to remember your family memories. As the film opens, we have an old lady called Marjorie (Lois Smith) who interacts with a younger avatar of her dead husband (Jon Hamm). What is fascinating is that she is teaching him their shared memories but chooses to alter some of them – making his proposal more romantic so that becomes the version of events. And then, as her memory fades and he becomes her factual record, it’s the fake memory that becomes the shared history. Marjorie’s daughter (Geena Davis) is initially horrified by the concept of her mother having a relationship with a Prime, while her husband (Tim Robbins) sees it as a boon. But as the film develops, we see the two of them have their own relationships with Primes and the position shifts as they too re-interpret history through shared but altered memories. In the final scene of the film, we see the Primes themselves interact and share those memories, moving further away from the truth. The film raises important and nuanced questions about the nature of shared memory and the ethics of altering it. Should the truth be privileged or is it better to tell white lies to comfort people? The problem with the film is that it reads like a didactic treatise rather than a living and breathing drama. Matters aren’t helped by the fact that director Michael Almereyda largely keeps the action in the closed confines of the family home, paces the film slowly, and does little with his camera. To that end, the movie feels like a filmed stage play. You may admire the ideas it purports, but some of its performances are boring and leaves you with an urgent need to escape via the nearest exit.