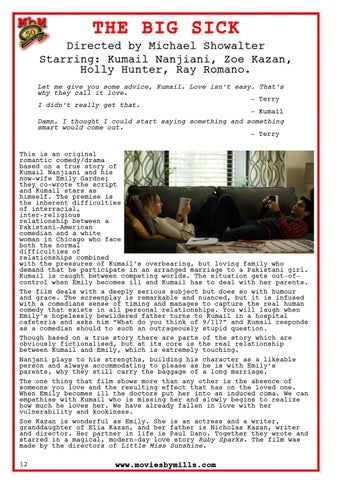 THE BIG SICK Directed by Michael Showalter Starring: Kumail Nanjiani, Zoe Kazan, Holly Hunter, Ray Romano. Let me give you some advice, Kumail. Love isn’t easy. That’s why they call it love. - Terry I didn’t really get that. - Kumail Damn. I thought I could start saying something and something smart would come out. - Terry This is an original romantic comedy/drama based on a true story of Kumail Nanjiani and his now-wife Emily Gardne; they co-wrote the script and Kumail stars as himself. The premise is the inherent difficulties of interracial, inter-religious relationship between a Pakistani-American comedian and a white woman in Chicago who face both the normal difficulties of relationships combined with the pressures of Kumail’s overbearing, but loving family who demand that he participate in an arranged marriage to a Pakistani girl. Kumail is caught between competing worlds. The situation gets out-ofcontrol when Emily becomes ill and Kumail has to deal with her parents. The film deals with a deeply serious subject but does so with humour and grace. The screenplay is remarkable and nuanced, but it is infused with a comedians sense of timing and manages to capture the real human comedy that exists in all personal relationships. You will laugh when Emily’s hopelessly bewildered father turns to Kumail in a hospital cafeteria and asks him “What do you think of 9/11?” and Kumail responds as a comedian should to such an outrageously stupid question. Though based on a true story there are parts of the story which are obviously fictionalised, but at its core is the real relationship between Kumail and Emily, which is extremely touching. Nanjani plays to his strengths, building his character as a likeable person and always accommodating to please as he is with Emily’s parents, why they still carry the baggage of a long marriage. The one thing that film shows more than any other is the absence of someone you love and the resulting effect that has on the loved one. When Emily becomes ill the doctors put her into an induced coma. We can empathise with Kumail who is missing her and slowly begins to realize how much he loves her. We have already fallen in love with her vulnerability and kookiness. Zoe Kazan is wonderful as Emily. She is an actress and a writer, granddaughter of Elia Kazan, and her father is Nicholas Kazan, writer and director. Her partner in life is Paul Dano. Together they wrote and starred in a magical, modern-day love story Ruby Sparks. The film was made by the directors of Little Miss Sunshine.