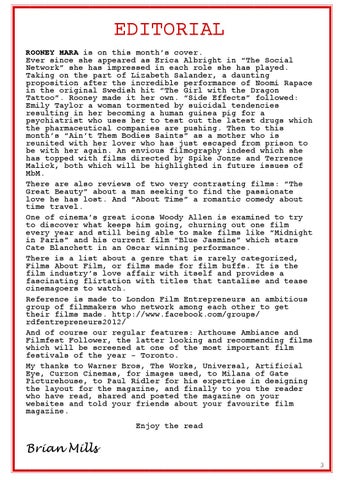 EDITORIAL ROONEY MARA is on this month’s cover. Ever since she appeared as Erica Albright in “The Social Network” she has impressed in each role she has played. Taking on the part of Lizabeth Salander, a daunting proposition after the incredible performance of Noomi Rapace in the original Swedish hit “The Girl with the Dragon Tattoo”. Rooney made it her own. “Side Effects” followed: Emily Taylor a woman tormented by suicidal tendencies resulting in her becoming a human guinea pig for a psychiatrist who uses her to test out the latest drugs which the pharmaceutical companies are pushing. Then to this month’s “Ain’t Them Bodies Saints” as a mother who is reunited with her lover who has just escaped from prison to be with her again. An envious filmography indeed which she has topped with films directed by Spike Jonze and Terrence Malick, both which will be highlighted in future issues of MbM. There are also reviews of two very contrasting films: “The Great Beauty” about a man seeking to find the passionate love he has lost. And “About Time” a romantic comedy about time travel. One of cinema’s great icons Woody Allen is examined to try to discover what keeps him going, churning out one film every year and still being able to make films like “Midnight in Paris” and his current film “Blue Jasmine” which stars Cate Blanchett in an Oscar winning performance. There is a list about a genre that is rarely categorized, Films About Film, or films made for film buffs. It is the film industry’s love affair with itself and provides a fascinating flirtation with titles that tantalise and tease cinemagoers to watch. Reference is made to London Film Entrepreneurs an ambitious group of filmmakers who network among each other to get their films made. http://www.facebook.com/groups/ rdfentrepreneurs2012/ And of course our regular features: Arthouse Ambiance and Filmfest Follower, the latter looking and recommending films which will be screened at one of the most important film festivals of the year - Toronto. My thanks to Warner Bros, The Works, Universal, Artificial Eye, Curzon Cinemas, for images used, to Milana of Gate Picturehouse, to Paul Ridler for his expertise in designing the layout for the magazine, and finally to you the reader who have read, shared and posted the magazine on your websites and told your friends about your favourite film magazine. Enjoy the read