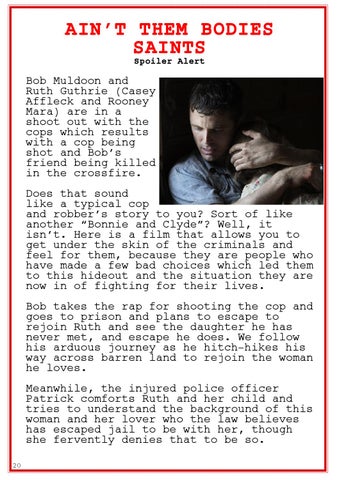 Bob Muldoon and Ruth Guthrie (Casey Affleck and Rooney Mara) are in a shoot out with the cops which results with a cop being shot and Bob’s friend being killed in the crossfire. Does that sound like a typical cop and robber’s story to you? Sort of like another “Bonnie and Clyde”? Well, it isn’t. Here is a film that allows you to get under the skin of the criminals and feel for them, because they are people who have made a few bad choices which led them to this hideout and the situation they are now in of fighting for their lives. Bob takes the rap for shooting the cop and goes to prison and plans to escape to rejoin Ruth and see the daughter he has never met, and escape he does. We follow his arduous journey as he hitch-hikes his way across barren land to rejoin the woman he loves. Meanwhile, the injured police officer Patrick comforts Ruth and her child and tries to understand the background of this woman and her lover who the law believes has escaped jail to be with her, though she fervently denies that to be so. 20