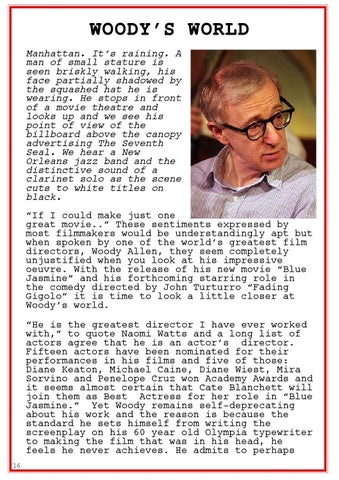 WOODY’S WORLD Manhattan. It’s raining. A man of small stature is seen briskly walking, his face partially shadowed by the squashed hat he is wearing. He stops in front of a movie theatre and looks up and we see his point of view of the billboard above the canopy advertising The Seventh Seal. We hear a New Orleans jazz band and the distinctive sound of a clarinet solo as the scene cuts to white titles on black.

“If I could make just one great movie..” These sentiments expressed by most filmmakers would be understandingly apt but when spoken by one of the world’s greatest film directors, Woody Allen, they seem completely unjustified when you look at his impressive oeuvre. With the release of his new movie “Blue Jasmine” and his forthcoming starring role in the comedy directed by John Turturro “Fading Gigolo” it is time to look a little closer at Woody’s world. “He is the greatest director I have ever worked with,” to quote Naomi Watts and a long list of actors agree that he is an actor’s director. Fifteen actors have been nominated for their performances in his films and five of those: Diane Keaton, Michael Caine, Diane Wiest, Mira Sorvino and Penelope Cruz won Academy Awards and it seems almost certain that Cate Blanchett will join them as Best Actress for her role in “Blue Jasmine.” Yet Woody remains self-deprecating about his work and the reason is because the standard he sets himself from writing the screenplay on his 60 year old Olympia typewriter to making the film that was in his head, he feels he never achieves. He admits to perhaps 16