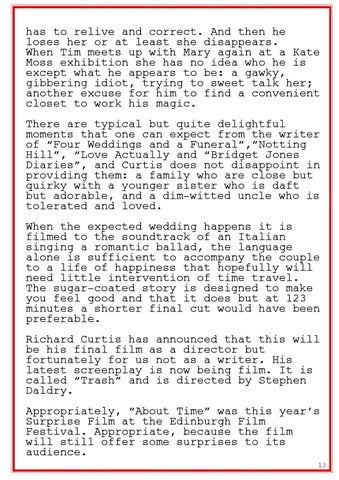 has to relive and correct. And then he loses her or at least she disappears. When Tim meets up with Mary again at a Kate Moss exhibition she has no idea who he is except what he appears to be: a gawky, gibbering idiot, trying to sweet talk her; another excuse for him to find a convenient closet to work his magic. There are typical but quite delightful moments that one can expect from the writer of “Four Weddings and a Funeral”,”Notting Hill”, “Love Actually and “Bridget Jones Diaries”, and Curtis does not disappoint in providing them: a family who are close but quirky with a younger sister who is daft but adorable, and a dim-witted uncle who is tolerated and loved. When the expected wedding happens it is filmed to the soundtrack of an Italian singing a romantic ballad, the language alone is sufficient to accompany the couple to a life of happiness that hopefully will need little intervention of time travel. The sugar-coated story is designed to make you feel good and that it does but at 123 minutes a shorter final cut would have been preferable. Richard Curtis has announced that this will be his final film as a director but fortunately for us not as a writer. His latest screenplay is now being film. It is called “Trash” and is directed by Stephen Daldry. Appropriately, “About Time” was this year’s Surprise Film at the Edinburgh Film Festival. Appropriate, because the film will still offer some surprises to its audience. 13