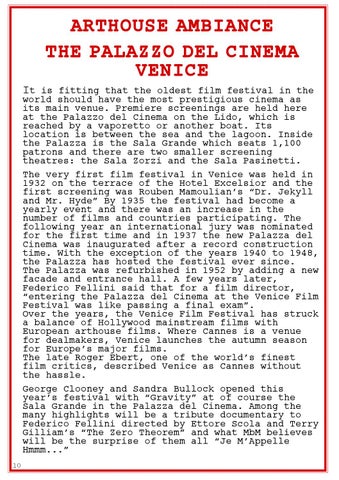 ARTHOUSE AMBIANCE THE PALAZZO DEL CINEMA VENICE It is fitting that the oldest film festival in the world should have the most prestigious cinema as its main venue. Premiere screenings are held here at the Palazzo del Cinema on the Lido, which is reached by a vaporetto or another boat. Its location is between the sea and the lagoon. Inside the Palazza is the Sala Grande which seats 1,100 patrons and there are two smaller screening theatres: the Sala Zorzi and the Sala Pasinetti. The very first film festival in Venice was held in 1932 on the terrace of the Hotel Excelsior and the first screening was Rouben Mamoulian’s “Dr. Jekyll and Mr. Hyde” By 1935 the festival had become a yearly event and there was an increase in the number of films and countries participating. The following year an international jury was nominated for the first time and in 1937 the new Palazza del Cinema was inaugurated after a record construction time. With the exception of the years 1940 to 1948, the Palazza has hosted the festival ever since. The Palazza was refurbished in 1952 by adding a new facade and entrance hall. A few years later, Federico Fellini said that for a film director, “entering the Palazza del Cinema at the Venice Film Festival was like passing a final exam”. Over the years, the Venice Film Festival has struck a balance of Hollywood mainstream films with European arthouse films. Where Cannes is a venue for dealmakers, Venice launches the autumn season for Europe’s major films. The late Roger Ebert, one of the world’s finest film critics, described Venice as Cannes without the hassle. George Clooney and Sandra Bullock opened this year’s festival with “Gravity” at of course the Sala Grande in the Palazza del Cinema. Among the many highlights will be a tribute documentary to Federico Fellini directed by Ettore Scola and Terry Gilliam’s “The Zero Theorem” and what MbM believes will be the surprise of them all “Je M’Appelle Hmmm...” 10