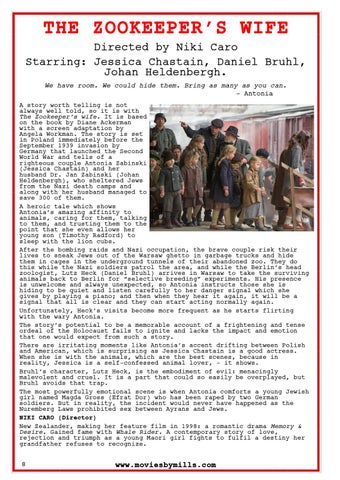 THE ZOOKEEPER’S WIFE Directed by Niki Caro Starring: Jessica Chastain, Daniel Bruhl, Johan Heldenbergh. We have room. We could hide them. Bring as many as you can. - Antonia A story worth telling is not always well told, so it is with The Zookeeper’s wife. It is based on the book by Diane Ackerman with a screen adaptation by Angela Workman. The story is set in Poland immediately before the September 1939 invasion by Germany that launched the Second World War and tells of a righteous couple Antonia Zabinski (Jessica Chastain) and her husband Dr. Jan Zabinski (Johan Heldenbergh), who sheltered Jews from the Nazi death camps and along with her husband managed to save 300 of them. A heroic tale which shows Antonia’s amazing affinity to animals, caring for them, talking to them, and trusting them to the point that she even allows her young son (Timothy Radford) to sleep with the lion cubs. After the bombing raids and Nazi occupation, the brave couple risk their lives to sneak Jews out of the Warsaw ghetto in garbage trucks and hide them in cages in the underground tunnels of their abandoned zoo. They do this while the Nazi soldiers patrol the area, and while the Berlin’s head zoologist, Lutz Heck (Daniel Bruhl) arrives in Warsaw to take the surviving animals back to Berlin for “selective breeding” experiments. His presence is unwelcome and always unexpected, so Antonia instructs those she is hiding to be quiet and listen carefully to her danger signal which she gives by playing a piano; and then when they hear it again, it will be a signal that all is clear and they can start acting normally again. Unfortunately, Heck’s visits become more frequent as he starts flirting with the wary Antonia. The story’s potential to be a memorable account of a frightening and tense ordeal of the Holocaust fails to ignite and lacks the impact and emotion that one would expect from such a story. There are irritating moments like Antonia’s accent drifting between Polish and American, which is surprising as Jessica Chastain is a good actress. When she is with the animals, which are the best scenes, because in reality, Jessica is a self-confessed animal lover, – it shows. Bruhl’s character, Lutz Heck, is the embodiment of evil: menacingly malevolent and cruel. It is a part that could so easily be overplayed, but Bruhl avoids that trap. The most powerfully emotional scene is when Antonia comforts a young Jewish girl named Magda Gross (Efrat Dor) who has been raped by two German soldiers. But in reality, the incident would never have happened as the Nuremberg Laws prohibited sex between Ayrans and Jews. NIKI CARO (Director) New Zealander, making her feature film in 1998: a romantic drama Memory &amp; Desire. Gained fame with Whale Rider. A contemporary story of love, rejection and triumph as a young Maori girl fights to fulfil a destiny her grandfather refuses to recognize.