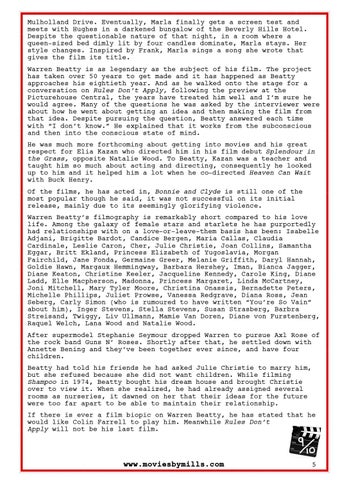 Mulholland Drive. Eventually, Marla finally gets a screen test and meets with Hughes in a darkened bungalow of the Beverly Hills Hotel. Despite the questionable nature of that night, in a room where a queen-sized bed dimly lit by four candles dominate, Marla stays. Her style changes. Inspired by Frank, Marla sings a song she wrote that gives the film its title. Warren Beatty is as legendary as the subject of his film. The project has taken over 50 years to get made and it has happened as Beatty approaches his eightieth year. And as he walked onto the stage for a conversation on Rules Don’t Apply, following the preview at the Picturehouse Central, the years have treated him well and I’m sure he would agree. Many of the questions he was asked by the interviewer were about how he went about getting an idea and then making the film from that idea. Despite pursuing the question, Beatty answered each time with “I don’t know.” He explained that it works from the subconscious and then into the conscious state of mind. He was much more forthcoming about getting into movies and his great respect for Elia Kazan who directed him in his film debut Splendour in the Grass, opposite Natalie Wood. To Beatty, Kazan was a teacher and taught him so much about acting and directing, consequently he looked up to him and it helped him a lot when he co-directed Heaven Can Wait with Buck Henry. Of the films, he has acted in, Bonnie and Clyde is still one of the most popular though he said, it was not successful on its initial release, mainly due to its seemingly glorifying violence. Warren Beatty’s filmography is remarkably short compared to his love life. Among the galaxy of female stars and starlets he has purportedly had relationships with on a love-or-leave-them basis has been: Isabelle Adjani, Brigitte Bardot, Candice Bergen, Maria Callas, Claudia Cardinale, Leslie Caron, Cher, Julie Christie, Joan Collins, Samantha Eggar, Britt Ekland, Princess Elizabeth of Yugoslavia, Morgan Fairchild, Jane Fonda, Germaine Greer, Melanie Griffith, Daryl Hannah, Goldie Hawn, Margaux Hemmingway, Barbara Hershey, Iman, Bianca Jagger, Diane Keaton, Christine Keeler, Jacqueline Kennedy, Carole King, Diane Ladd, Elle Macpherson, Madonna, Princess Margaret, Linda McCartney, Joni Mitchell, Mary Tyler Moore, Christina Onassis, Bernadette Peters, Michelle Phillips, Juliet Prowse, Vanessa Redgrave, Diana Ross, Jean Seberg, Carly Simon (who is rumoured to have written “You’re So Vain” about him), Inger Stevens, Stella Stevens, Susan Strasberg, Barbra Streisand, Twiggy, Liv Ullmann, Mamie Van Doren, Diane von Furstenberg, Raquel Welch, Lana Wood and Natalie Wood. After supermodel Stephanie Seymour dropped Warren to pursue Axl Rose of the rock band Guns N’ Roses. Shortly after that, he settled down with Annette Bening and they’ve been together ever since, and have four children. Beatty had told his friends he had asked Julie Christie to marry him, but she refused because she did not want children. While filming Shampoo in 1974, Beatty bought his dream house and brought Christie over to view it. When she realized, he had already assigned several rooms as nurseries, it dawned on her that their ideas for the future were too far apart to be able to maintain their relationship. If there is ever a film biopic on Warren Beatty, he has stated that he would like Colin Farrell to play him. Meanwhile Rules Don’t Apply will not be his last film.