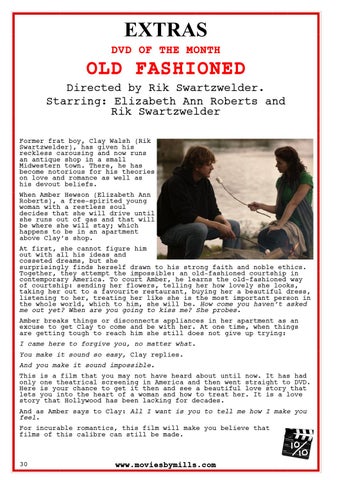 OLD FASHIONED Directed by Rik Swartzwelder. Starring: Elizabeth Ann Roberts and Rik Swartzwelder Former frat boy, Clay Walsh (Rik Swartzwelder), has given his reckless carousing and now runs an antique shop in a small Midwestern town. There, he has become notorious for his theories on love and romance as well as his devout beliefs. When Amber Hewson (Elizabeth Ann Roberts), a free-spirited young woman with a restless soul decides that she will drive until she runs out of gas and that will be where she will stay; which happens to be in an apartment above Clayâ&amp;#x20AC;&amp;#x2122;s shop. At first, she cannot figure him out with all his ideas and cosseted dreams, but she surprisingly finds herself drawn to his strong faith and noble ethics. Together, they attempt the impossible: an old-fashioned courtship in contemporary America. To court Amber, he learns the old-fashioned way of courtship: sending her flowers, telling her how lovely she looks, taking her out to a favourite restaurant, buying her a beautiful dress, listening to her, treating her like she is the most important person in the whole world, which to him, she will be. How come you havenâ&amp;#x20AC;&amp;#x2122;t asked me out yet? When are you going to kiss me? She probes. Amber breaks things or disconnects appliances in her apartment as an excuse to get Clay to come and be with her. At one time, when things are getting tough to reach him she still does not give up trying: I came here to forgive you, no matter what. You make it sound so easy, Clay replies. And you make it sound impossible. This is a film that you may not have heard about until now. It has had only one theatrical screening in America and then went straight to DVD. Here is your chance to get it then and see a beautiful love story that lets you into the heart of a woman and how to treat her. It is a love story that Hollywood has been lacking for decades. And as Amber says to Clay: All I want is you to tell me how I make you feel. For incurable romantics, this film will make you believe that films of this calibre can still be made.