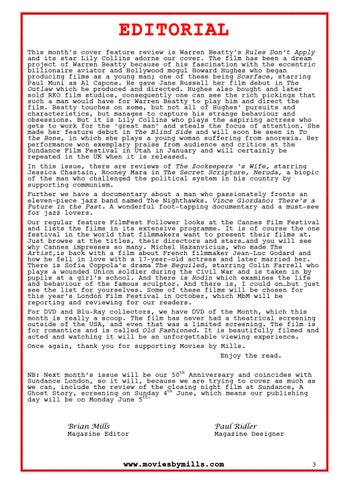 EDITORIAL This month’s cover feature review is Warren Beatty’s Rules Don’t Apply and its star Lily Collins adorns our cover. The film has been a dream project of Warren Beatty because of his fascination with the eccentric billionaire aviator and Hollywood mogul Howard Hughes who began producing films as a young man; one of these being Scarface, starring Paul Muni as Al Capone. He gave Jane Russell her film debut in The Outlaw which he produced and directed. Hughes also bought and later sold RKO film studios, consequently one can see the rich pickings that such a man would have for Warren Beatty to play him and direct the film. Beatty touches on some, but not all of Hughes’ pursuits and characteristics, but manages to capture his strange behaviour and obsessions. But it is Lily Collins who plays the aspiring actress who gets to work for the ‘great man’ and steals the focus of attention. She made her feature debut in The Blind Side and will soon be seen in To the Bone, in which she plays a young woman suffering from anorexia. Her performance won exemplary praise from audience and critics at the Sundance Film Festival in Utah in January and will certainly be repeated in the UK when it is released. In this issue, there are reviews of The Zookeepers ’s Wife, starring Jessica Chastain, Rooney Mara in The Secret Scripture, Neruda, a biopic of the man who challenged the political system in his country by supporting communism. Further we have a documentary about a man who passionately fronts an eleven-piece jazz band named The Nighthawks. Vince Giordano: There’s a Future in the Past. A wonderful foot-tapping documentary and a must-see for jazz lovers. Our regular feature FilmFest Follower looks at the Cannes Film Festival and lists the films in its extensive programme. It is of course the one festival in the world that filmmakers want to present their films at. Just browse at the titles, their directors and stars…and you will see why Cannes impresses so many. Michel Hazanvicius, who made The Artist,is back with a film about French filmmaker Jean-Luc Godard and how he fell in love with a 17-yesr-old actress and later married her. There is Sofia Coppola’s drama The Beguiled, starring Colin Farrell who plays a wounded Union soldier during the Civil War and is taken in by pupils at a girl’s school. And there is Rodin which examines the life and behaviour of the famous sculptor. And there is, I could on…but just see the list for yourselves. Some of these films will be chosen for this year’s London Film Festival in October, which MbM will be reporting and reviewing for our readers. For DVD and Blu-Ray collectors, we have DVD of the Month, which this month is really a scoop. The film has never had a theatrical screening outside of the USA, and even that was a limited screening. The film is for romantics and is called Old Fashioned. It is beautifully filmed and acted and watching it will be an unforgettable viewing experience. Once again, thank you for supporting Movies by Mills. Enjoy the read. NB: Next month’s issue will be our 50th Anniversary and coincides with Sundance London, so it will, because we are trying to cover as much as we can, include the review of the th closing night film at Sundance, A Ghost Story, screening on Sunday 4 June, which means our publishing day will be on Monday June 5th.