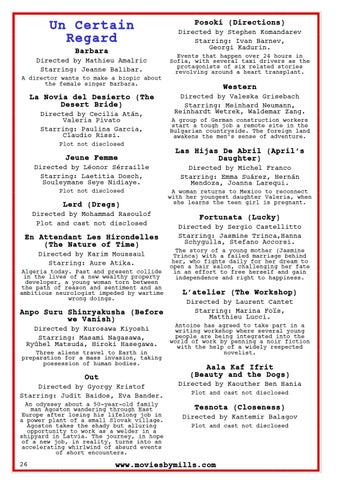 A director wants to make a biopic about the female singer Barbara.

A woman returns to Mexico to reconnect with her youngest daughter Valeria, when she learns the teen girl is pregnant.

En Attendant Les Hirondelles (The Nature of Time) Directed by Karim Moussaul Starring: Aure Atika. Algeria today. Past and present collide in the lives of a new wealthy property developer, a young woman torn between the path of reason and sentiment and an ambitious neurologist impeded by wartime wrong doings.

Fortunata (Lucky) Directed by Sergio Castellitto Starring: Jasmine Trinca,Hanna Schygulla, Stefano Accorsi. The story of a young mother (Jasmine Trinca) with a failed marriage behind her, who fights daily for her dream to open a hair salon, challenging her fate in an effort to free herself and gain independence and right to happiness.

L’atelier (The Workshop) Directed by Laurent Cantet Starring: Marina Foïs, Matthieu Lucci. Antoine has agreed to take part in a writing workshop where several young people are being integrated into the world of work by penning a noir fiction with the help of a widely respected novelist.

An odyssey about a 50-year-old family man Agoston wandering through East Europe after losing his lifelong job in a power plant of a small Slovak village. Agoston takes the shady but alluring opportunity to work as a welder in a shipyard in Latvia. The journey, in hope of a new job, in reality, turns into an accelerating whirlwind of absurd events of short encounters.

Plot and cast not disclosed

Directed by Kantemir Balagov Plot and cast not disclosed