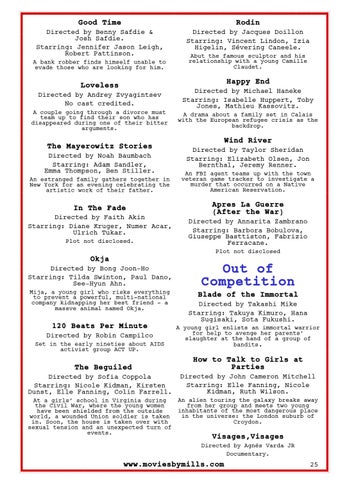 A bank robber finds himself unable to evade those who are looking for him.

Abut the famous sculptor and his relationship with a young Camille Claudet.

A couple going through a divorce must team up to find their son who has disappeared during one of their bitter arguments.

A drama about a family set in Calais with the European refugee crisis as the backdrop.

An estranged family gathers together in New York for an evening celebrating the artistic work of their father.

An FBI agent teams up with the town veteran game tracker to investigate a murder that occurred on a Native American Reservation.

Apres La Guerre (After the War)

Mija, a young girl who risks everything to prevent a powerful, multi-national company kidnapping her best friend – a massve animal named Okja.

Blade of the Immortal

120 Beats Per Minute Directed by Robin Campilco Set in the early nineties about AIDS activist group ACT UP.

Directed by Takashi Mike Starring: Takuya Kimuro, Hana Sugisaki, Sota Fukushi. A young girl enlists an immortal warrior for help to avenge her parents’ slaughter at the hand of a group of bandits.

How to Talk to Girls at Parties

At a girls’ school in Virginia during the Civil War, where the young women have been shielded from the outside world, a wounded Union soldier is taken in. Soon, the house is taken over with sexual tension and an unexpected turn of events.

An alien touring the galaxy breaks away from her group and meets two young inhabitants of the most dangerous place in the universe: the London suburb of Croydon.