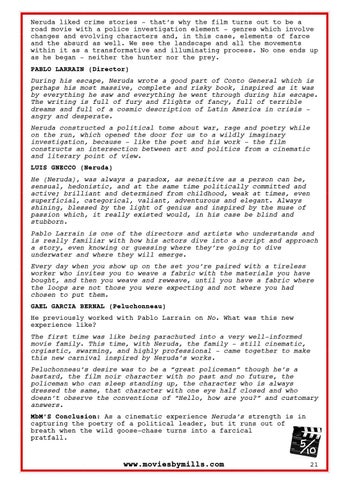 Neruda liked crime stories – that’s why the film turns out to be a road movie with a police investigation element – genres which involve changes and evolving characters and, in this case, elements of farce and the absurd as well. We see the landscape and all the movements within it as a transformative and illuminating process. No one ends up as he began – neither the hunter nor the prey. PABLO LARRAIN (Director) During his escape, Neruda wrote a good part of Conto General which is perhaps his most massive, complete and risky book, inspired as it was by everything he saw and everything he went through during his escape. The writing is full of fury and flights of fancy, full of terrible dreams and full of a cosmic description of Latin America in crisis – angry and desperate. Neruda constructed a political tome about war, rage and poetry while on the run, which opened the door for us to a wildly imaginary investigation, because – like the poet and his work – the film constructs an intersection between art and politics from a cinematic and literary point of view. LUIS GNECCO (Neruda) He (Neruda), was always a paradox, as sensitive as a person can be, sensual, hedonistic, and at the same time politically committed and active; brilliant and determined from childhood, weak at times, even superficial, categorical, valiant, adventurous and elegant. Always shining, blessed by the light of genius and inspired by the muse of passion which, it really existed would, in his case be blind and stubborn. Pablo Larrain is one of the directors and artists who understands and is really familiar with how his actors dive into a script and approach a story, even knowing or guessing where they’re going to dive underwater and where they will emerge. Every day when you show up on the set you’re paired with a tireless worker who invites you to weave a fabric with the materials you have bought, and then you weave and reweave, until you have a fabric where the loops are not those you were expecting and not where you had chosen to put them. GAEL GARCIA BERNAL (Peluchonneau) He previously worked with Pablo Larrain on No. What was this new experience like? The first time was like being parachuted into a very well-informed movie family. This time, with Neruda, the family – still cinematic, orgiastic, swarming, and highly professional – came together to make this new carnival inspired by Neruda’s works. Peluchonneau’s desire was to be a “great policeman” though he’s a bastard, the film noir character with no past and no future, the policeman who can sleep standing up, the character who is always dressed the same, that character with one eye half closed and who doesn’t observe the conventions of “Hello, how are you?” and customary answers. MbM’S Conclusion: As a cinematic experience Neruda’s strength is in capturing the poetry of a political leader, but it runs out of breath when the wild goose-chase turns into a farcical pratfall.