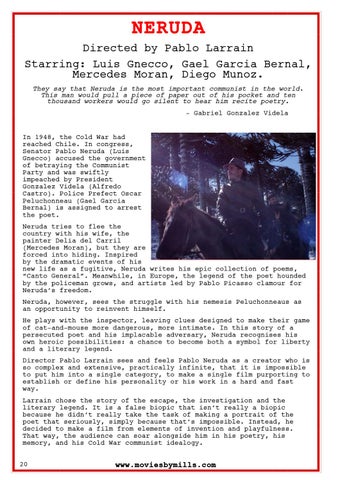 NERUDA Directed by Pablo Larrain Starring: Luis Gnecco, Gael Garcia Bernal, Mercedes Moran, Diego Munoz. They say that Neruda is the most important communist in the world. This man would pull a piece of paper out of his pocket and ten thousand workers would go silent to hear him recite poetry. - Gabriel Gonzalez Videla

In 1948, the Cold War had reached Chile. In congress, Senator Pablo Neruda (Luis Gnecco) accused the government of betraying the Communist Party and was swiftly impeached by President Gonzalez Videla (Alfredo Castro). Police Prefect Oscar Peluchonneau (Gael Garcia Bernal) is assigned to arrest the poet. Neruda tries to flee the country with his wife, the painter Delia del Carril (Mercedes Moran), but they are forced into hiding. Inspired by the dramatic events of his new life as a fugitive, Neruda writes his epic collection of poems, “Canto General”. Meanwhile, in Europe, the legend of the poet hounded by the policeman grows, and artists led by Pablo Picasso clamour for Neruda’s freedom. Neruda, however, sees the struggle with his nemesis Peluchonneaus as an opportunity to reinvent himself. He plays with the inspector, leaving clues designed to make their game of cat-and-mouse more dangerous, more intimate. In this story of a persecuted poet and his implacable adversary, Neruda recognises his own heroic possibilities: a chance to become both a symbol for liberty and a literary legend. Director Pablo Larrain sees and feels Pablo Neruda as a creator who is so complex and extensive, practically infinite, that it is impossible to put him into a single category, to make a single film purporting to establish or define his personality or his work in a hard and fast way. Larrain chose the story of the escape, the investigation and the literary legend. It is a false biopic that isn’t really a biopic because he didn’t really take the task of making a portrait of the poet that seriously, simply because that’s impossible. Instead, he decided to make a film from elements of invention and playfulness. That way, the audience can soar alongside him in his poetry, his memory, and his Cold War communist idealogy. 20