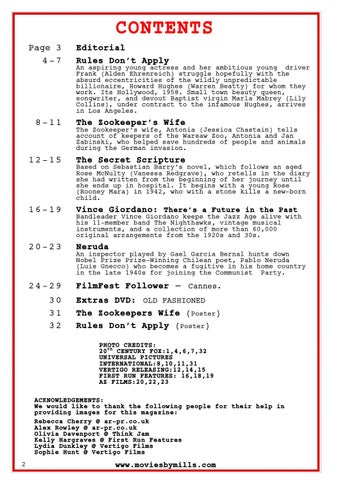 Vince Giordano: There’s a Future in the Past

The Zookeeper’s wife, Antonia (Jessica Chastain) tells account of keepers of the Warsaw Zoo, Antonia and Jan Zabinski, who helped save hundreds of people and animals during the German invasion. Based on Sebastian Barry’s novel, which follows an aged Rose McNulty (Vanessa Redgrave), who retells in the diary she had written from the beginning of her journey until she ends up in hospital. It begins with a young Rose (Rooney Mara) in 1942, who with a stone kills a new-born child. Bandleader Vince Giordano keeps the Jazz Age alive with his 11-member band The Nighthawks, vintage musical instruments, and a collection of more than 60,000 original arrangements from the 1920s and 30s. An inspector played by Gael Garcia Bernal hunts down Nobel Prize Prize-Winning Chilean poet, Pablo Neruda (Luis Gnecco) who becomes a fugitive in his home country in the late 1940s for joining the Communist Party.