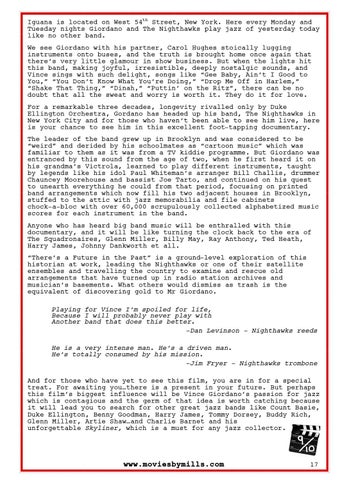 Iguana is located on West 54th Street, New York. Here every Monday and Tuesday nights Giordano and The Nighthawks play jazz of yesterday today like no other band. We see Giordano with his partner, Carol Hughes stoically lugging instruments onto buses, and the truth is brought home once again that there’s very little glamour in show business. But when the lights hit this band, making joyful, irresistible, deeply nostalgic sounds, and Vince sings with such delight, songs like “Gee Baby, Ain’t I Good to You,” “You Don’t Know What You’re Doing,” “Drop Me Off in Harlem,” “Shake That Thing,” “Dinah,” “Puttin’ on the Ritz”, there can be no doubt that all the sweat and worry is worth it. They do it for love. For a remarkable three decades, longevity rivalled only by Duke Ellington Orchestra, Gordano has headed up his band, The Nighthawks in New York City and for those who haven’t been able to see him live, here is your chance to see him in this excellent foot-tapping documentary.

The leader of the band grew up in Brooklyn and was considered to be “weird” and derided by his schoolmates as “cartoon music” which was familiar to them as it was from a TV kiddie programme. But Giordano was entranced by this sound from the age of two, when he first heard it on his grandma’s Victrola, learned to play different instruments, taught by legends like his idol Paul Whiteman’s arranger Bill Challis, drummer Chauncey Moorehouse and bassist Joe Tarto, and continued on his quest to unearth everything he could from that period, focusing on printed band arrangements which now fill his two adjacent houses in Brooklyn, stuffed to the attic with jazz memorabilia and file cabinets chock-a-bloc with over 60,000 scrupulously collected alphabetized music scores for each instrument in the band. Anyone who has heard big band music will be enthralled with this documentary, and it will be like turning the clock back to the era of The Squadronaires, Glenn Miller, Billy May, Ray Anthony, Ted Heath, Harry James, Johnny Dankworth et all. “There’s a Future in the Past” is a ground-level exploration of this historian at work, leading the Nighthawks or one of their satellite ensembles and travelling the country to examine and rescue old arrangements that have turned up in radio station archives and musician’s basements. What others would dismiss as trash is the equivalent of discovering gold to Mr Giordano. Playing for Vince I’m spoiled for life, Because I will probably never play with Another band that does this better. -Dan Levinson – Nighthawks reeds He is a very intense man. He’s a driven man. He’s totally consumed by his mission. -Jim Fryer - Nighthawks trombone And for those who have yet to see this film, you are in for a special treat. For awaiting you…there is a present in your future. But perhaps this film’s biggest influence will be Vince Giordano’s passion for jazz which is contagious and the germ of that idea is worth catching because it will lead you to search for other great jazz bands like Count Basie, Duke Ellington, Benny Goodman, Harry James, Tommy Dorsey, Buddy Rich, Glenn Miller, Artie Shaw…and Charlie Barnet and his unforgettable Skyliner, which is a must for any jazz collector.