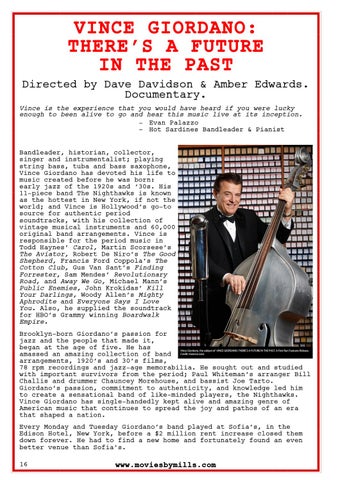 VINCE GIORDANO: THERE’S A FUTURE IN THE PAST Directed by Dave Davidson &amp; Amber Edwards. Documentary. Vince is the experience that you would have heard if you were lucky enough to been alive to go and hear this music live at its inception. - Evan Palazzo - Hot Sardines Bandleader &amp; Pianist Bandleader, historian, collector, singer and instrumentalist; playing string bass, tuba and bass saxophone, Vince Giordano has devoted his life to music created before he was born: early jazz of the 1920s and ‘30s. His 11-piece band The Nighthawks is known as the hottest in New York, if not the world; and Vince is Hollywood’s go-to source for authentic period soundtracks, with his collection of vintage musical instruments and 60,000 original band arrangements. Vince is responsible for the period music in Todd Haynes’ Carol, Martin Scorsese’s The Aviator, Robert De Niro’s The Good Shepherd, Francis Ford Coppola’s The Cotton Club, Gus Van Sant’s Finding Forrester, Sam Mendes’ Revolutionary Road, and Away We Go, Michael Mann’s Public Enemies, John Krokidas’ Kill Your Darlings, Woody Allen’s Mighty Aphrodite and Everyone Says I Love You. Also, he supplied the soundtrack for HBO’s Grammy winning Boardwalk Empire. Brooklyn-born Giordano’s passion for jazz and the people that made it, began at the age of five. He has amassed an amazing collection of band arrangements, 1920’s and 30’s films, 78 rpm recordings and jazz-age memorabilia. He sought out and studied with important survivors from the period; Paul Whiteman’s arranger Bill Challis and drummer Chauncey Morehouse, and bassist Joe Tarto. Giordano’s passion, commitment to authenticity, and knowledge led him to create a sensational band of like-minded players, the Nighthawks. Vince Giordano has single-handedly kept alive and amazing genre of American music that continues to spread the joy and pathos of an era that shaped a nation. Every Monday and Tuesday Giordano’s band played at Sofia’s, in the Edison Hotel, New York, before a $2 million rent increase closed them down forever. He had to find a new home and fortunately found an even better venue than Sofia’s. 16