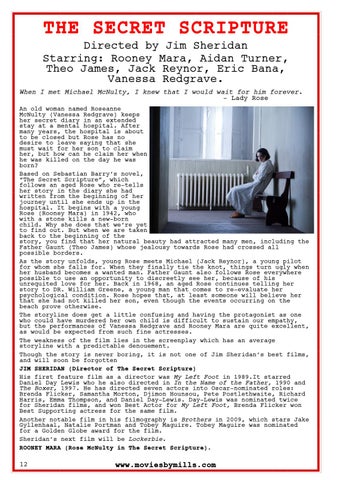 THE SECRET SCRIPTURE Directed by Jim Sheridan Starring: Rooney Mara, Aidan Turner, Theo James, Jack Reynor, Eric Bana, Vanessa Redgrave. When I met Michael McNulty, I knew that I would wait for him forever. - Lady Rose An old woman named Roseanne McNulty (Vanessa Redgrave) keeps her secret diary in an extended stay at a mental hospital. After many years, the hospital is about to be closed but Rose has no desire to leave saying that she must wait for her son to claim her, but how can he claim her when he was killed on the day he was born? Based on Sebastian Barry’s novel, “The Secret Scripture”, which follows an aged Rose who re-tells her story in the diary she had written from the beginning of her journey until she ends up in the hospital. It begins with a young Rose (Rooney Mara) in 1942, who with a stone kills a new-born child. Why she does that we’re yet to find out. But when we are taken back to the beginning of the story, you find that her natural beauty had attracted many men, including the Father Gaunt (Theo James) whose jealousy towards Rose had crossed all possible borders. As the story unfolds, young Rose meets Michael (Jack Reynor), a young pilot for whom she falls for. When they finally tie the knot, things turn ugly when her husband becomes a wanted man. Father Gaunt also follows Rose everywhere possible to use an opportunity to discreetly see her, because of his unrequited love for her. Back in 1968, an aged Rose continues telling her story to DR. William Greene, a young man that comes to re-evaluate her psychological condition. Rose hopes that, at least someone will believe her that she had not killed her son, even though the events occurring on the beach prove otherwise. The storyline does get a little confusing and having the protagonist as one who could have murdered her own child is difficult to sustain our empathy, but the performances of Vanessa Redgrave and Rooney Mara are quite excellent, as would be expected from such fine actresses. The weakness of the film lies in the screenplay which has an average storyline with a predictable denouement. Though the story is never boring, it is not one of Jim Sheridan’s best films, and will soon be forgotten JIM SHERIDAN (Director of The Secret Scripture) His first feature film as a director was My Left Foot in 1989.It starred Daniel Day Lewis who he also directed in In the Name of the Father, 1990 and The Boxer, 1997. He has directed seven actors into Oscar-nominated roles: Brenda Flicker, Samantha Morton, Djimon Hounsou, Pete Postlethwaite, Richard Harris, Emma Thompson, and Daniel Day-Lewis. Day-Lewis was nominated twice for Sheridan films, and won Best Actor for My Left Foot, Brenda Flicker won Best Supporting actress for the same film. Another notable film in his filmography is Brothers in 2009, which stars Jake Gyllenhaal, Natalie Portman and Tobey Maguire. Tobey Maguire was nominated for a Golden Globe award for the film. Sheridan’s next film will be Lockerbie. ROONEY MARA (Rose McNulty in The Secret Scripture).