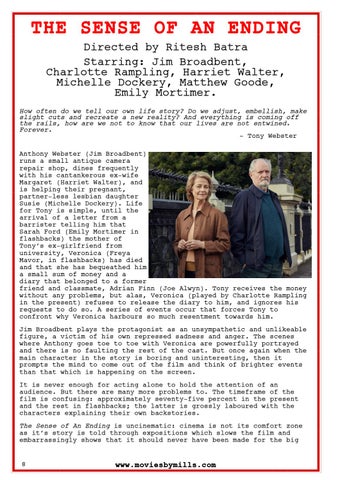 THE SENSE OF AN ENDING Directed by Ritesh Batra Starring: Jim Broadbent, Charlotte Rampling, Harriet Walter, Michelle Dockery, Matthew Goode, Emily Mortimer. How often do we tell our own life story? Do we adjust, embellish, make slight cuts and recreate a new reality? And everything is coming off the rails, how are we not to know that our lives are not entwined. Forever. - Tony Webster Anthony Webster (Jim Broadbent) runs a small antique camera repair shop, dines frequently with his cantankerous ex-wife Margaret (Harriet Walter), and is helping their pregnant, partner-less lesbian daughter Susie (Michelle Dockery). Life for Tony is simple, until the arrival of a letter from a barrister telling him that Sarah Ford (Emily Mortimer in flashbacks) the mother of Tonyâ&amp;#x20AC;&amp;#x2122;s ex-girlfriend from university, Veronica (Freya Mavor, in flashbacks) has died and that she has bequeathed him a small sum of money and a diary that belonged to a former friend and classmate, Adrian Finn (Joe Alwyn). Tony receives the money without any problems, but alas, Veronica (played by Charlotte Rampling in the present) refuses to release the diary to him, and ignores his requests to do so. A series of events occur that forces Tony to confront why Veronica harbours so much resentment towards him. Jim Broadbent plays the protagonist as an unsympathetic and unlikeable figure, a victim of his own repressed sadness and anger. The scenes where Anthony goes toe to toe with Veronica are powerfully portrayed and there is no faulting the rest of the cast. But once again when the main character in the story is boring and uninteresting, then it prompts the mind to come out of the film and think of brighter events than that which is happening on the screen. It is never enough for acting alone to hold the attention of an audience. But there are many more problems to. The timeframe of the film is confusing: approximately seventy-five percent in the present and the rest in flashbacks; the latter is grossly laboured with the characters explaining their own backstories. The Sense of An Ending is uncinematic: cinema is not its comfort zone as itâ&amp;#x20AC;&amp;#x2122;s story is told through expositions which slows the film and embarrassingly shows that it should never have been made for the big