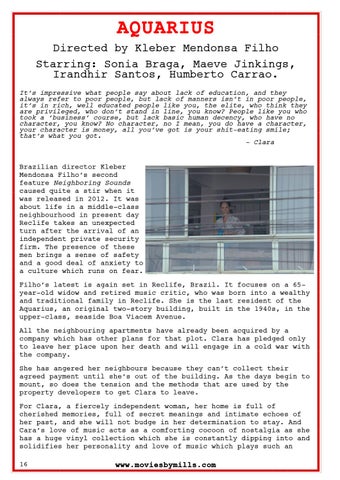 AQUARIUS Directed by Kleber Mendonsa Filho Starring: Sonia Braga, Maeve Jinkings, Irandhir Santos, Humberto Carrao. It’s impressive what people say about lack of education, and they always refer to poor people, but lack of manners isn’t in poor people, it’s in rich, well educated people like you, the elite, who think they are privileged, who don’t stand in line, you know? People like you who took a ‘business’ course, but lack basic human decency, who have no character, you know? No character, no I mean, you do have a character, your character is money, all you’ve got is your shit-eating smile; that’s what you got. - Clara

Brazilian director Kleber Mendonsa Filho’s second feature Neighboring Sounds caused quite a stir when it was released in 2012. It was about life in a middle-class neighbourhood in present day Reclife takes an unexpected turn after the arrival of an independent private security firm. The presence of these men brings a sense of safety and a good deal of anxiety to a culture which runs on fear. Filho’s latest is again set in Reclife, Brazil. It focuses on a 65year-old widow and retired music critic, who was born into a wealthy and traditional family in Reclife. She is the last resident of the Aquarius, an original two-story building, built in the 1940s, in the upper-class, seaside Boa Viacem Avenue. All the neighbouring apartments have already been acquired by a company which has other plans for that plot. Clara has pledged only to leave her place upon her death and will engage in a cold war with the company. She has angered her neighbours because they can’t collect their agreed payment until she’s out of the building. As the days begin to mount, so does the tension and the methods that are used by the property developers to get Clara to leave. For Clara, a fiercely independent woman, her home is full of cherished memories, full of secret meanings and intimate echoes of her past, and she will not budge in her determination to stay. And Cara’s love of music acts as a comforting cocoon of nostalgia as she has a huge vinyl collection which she is constantly dipping into and solidifies her personality and love of music which plays such an 16