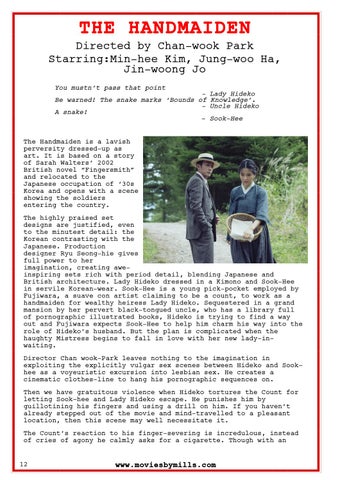 THE HANDMAIDEN Directed by Chan-wook Park Starring:Min-hee Kim, Jung-woo Ha, Jin-woong Jo You mustn’t pass that point – Be warned! The snake marks ‘Bounds of A snake! -

The Handmaiden is a lavish perversity dressed-up as art. It is based on a story of Sarah Walters’ 2002 British novel “Fingersmith” and relocated to the Japanese occupation of ‘30s Korea and opens with a scene showing the soldiers entering the country. The highly praised set designs are justified, even to the minutest detail: the Korean contrasting with the Japanese. Production designer Ryu Seong-hie gives full power to her imagination, creating aweinspiring sets rich with period detail, blending Japanese and British architecture. Lady Hideko dressed in a Kimono and Sook-Hee in servile Korean-wear. Sook-Hee is a young pick-pocket employed by Fujiwara, a suave con artist claiming to be a count, to work as a handmaiden for wealthy heiress Lady Hideko. Sequestered in a grand mansion by her pervert black-tongued uncle, who has a library full of pornographic illustrated books, Hideko is trying to find a way out and Fujiwara expects Sook-Hee to help him charm his way into the role of Hideko’s husband. But the plan is complicated when the haughty Mistress begins to fall in love with her new lady-inwaiting. Director Chan wook-Park leaves nothing to the imagination in exploiting the explicitly vulgar sex scenes between Hideko and Sookhee as a voyeuristic excursion into lesbian sex. He creates a cinematic clothes-line to hang his pornographic sequences on. Then we have gratuitous violence when Hideko tortures the Count for letting Sook-hee and Lady Hideko escape. He punishes him by guillotining his fingers and using a drill on him. If you haven’t already stepped out of the movie and mind-travelled to a pleasant location, then this scene may well necessitate it. The Count’s reaction to his finger-severing is incredulous, instead of cries of agony he calmly asks for a cigarette. Though with an